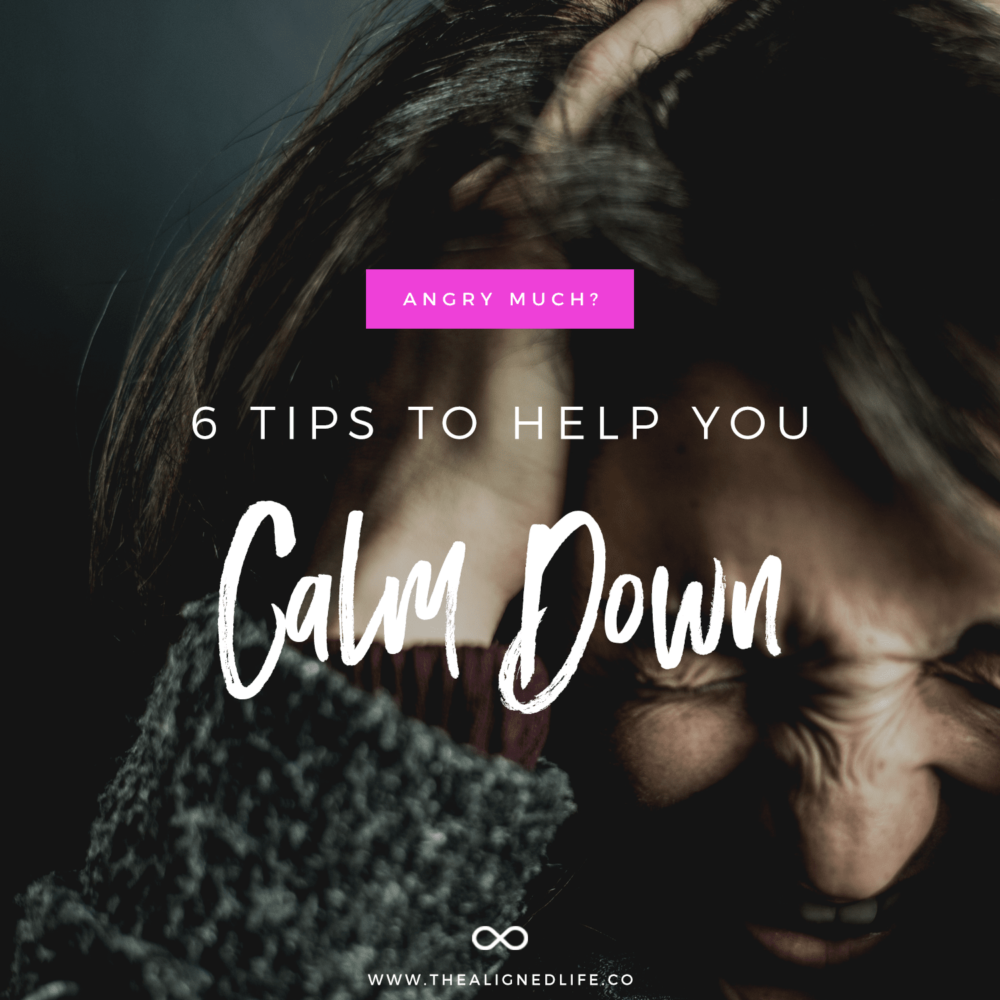 Admit it! As much as you meditate, work on your thoughts and align your chakras, every once in a while you still feel it:

There’s no mistaking it either: your cheeks heating up, your hands getting sweaty, your heart racing. It’s one of those feelings that’s unmistakable!

It’s not exactly fun–and quite frankly at times it can also be a little scary!

When our switch flips, it can seem like the Jeckyll to our Hyde has suddenly been unleashed on the world!

We do or say things we don’t really mean. And later on, those same reactions can lead us to feel shame and embarrassment.

And it’s never cool to feel like you’re out of control! ????

But please know this: anger is just another one of our human emotions–meaning it’s something we all experience at some point in time!

There isn’t anything wrong with you. And feeling that extra guilt and judgment around this isn’t doing anyone any favors!

However, even though anger is normal, you don’t have to stay feeling out of control! Fortunately there are ways to help yourself calm down–even when things have got you feeling some kind of way! Here are six tips to help you get started.

Angry Much: 6 Tips To Help You Calm Down

Don’t judge yourself too harshly! All too often we judge our emotions for being either “good” or “bad” and we think poorly of ourselves for experiencing the “bad” ones. But every single emotion is actually just here to teach us something.

So the bigger question is: what is your anger here to tell you? Anger isn’t always irrational and useless! More often it’s a very clear signal that something is way off. However, that doesn’t always mean that other people are the true source of the problem! Most of the time this is just a signal for us to either take real-world action or to rearrange our thoughts to create a better feeling about something that we can’t control.

Name It To Tame It

Naming your emotions might not seem like much at first but it’s actually a helpful step in getting back your sense of control. One of the problems with anger is that it allows us to temporarily let our ego/ monkey mind to take over the controls (which is why you say or do things that aren’t actually reflective of you).

Slowing down is so key to getting control back! So simply saying “oh look I’m feeling angry” and allowing yourself to get curious about why can give you power over the situation. If you let the anger swoop you up and run away with you, that’s when you might end up doing something you won’t feel so great about down the road.

As you well know, one of the first things that changes when you’re angry is your breathing. When our bodies go into fight or flight mode, it’s a clear sign that we’ve relinquished some of our normal level of control.

But why not try to get it back? When it comes to anger, most of us react by trying to change our outer circumstances (which rarely works!). Instead, get control of what really matters (aka YOU) and focus on controlling your breath.

Let’s face it: it’s hard to be reasonable and rational when your body is convincing you to run. But taking even just three deep centering breaths can give you back your sense of control–which can then let you slow down your thoughts instead of letting them get the best of you.

Everything is just a story boo! So what story are you writing? We all think that we’re having an emotional reaction just from what’s actually happening! But what we’re actually reacting to is what we’re making something mean.

In all of these cases, it’s simple to see that your conclusion might not be the only one–or even the accurate one! In the moment, when you’re the one experiencing the anger, it might be a lot harder to slow down and see something new. But simply understanding this process can allow you to create curiosity about yourself–and as long as you stay in curiosity mode, you’ll stay out of angry mode!

Have you ever watched two cats about to fight? Very often they’ll hiss and yowl at each other then suddenly–before a fight actually breaks out–they’ll simply blink and shake themselves off. Fight over! But we are not so different from our animal friends! Sometimes shaking off the anger/excess energy is a good way to come back to feeling “normal”.

Your physical body is not separate from your emotional body! Anger creates a very real sensation in the body–one the can be difficult to ignore! So don’t just try to ignore it away! Try shaking it out. If you can, go to the bathroom (or somewhere where you won’t be seen) and do a whole body shake. But if that’s not possible, try gently shaking out your hands or feet. Basically do anything you can do do loosen up that tension in your body and disperse back outside of you.

Anger isn’t always a bad thing–in fact, it can be one of our very best motivational tools! But obviously I don’t mean that it’s okay for you to go swipe your (supposedly) cheating boyfriend’s tires! But you can harness even a negative feeling into something positive.

Think aback about your own life and I’m sure you can find a time where this was true for you! Think Khloe Kardashian’s “breakup revenge body” or the time you applied for that job because you didn’t want your snaky co-worker to get it. Anger isn’t alway destructive! In fact, sometimes it can motivate us to do the things we’ve always wanted to do–but were just waiting on an excuse for.

So what can you use your anger for? Where can you allow it to push you? Anger is really close to passion after all so let that passion fuel what’s actually best for you!

So what do you think? Which tip are you going to implement? What works to help you calm down when you’re feeling angry?

It’s time to stop judging ourselves for feeling what we think are “negative” emotions and to start simply learning from them instead! No matter how good you get at life, sometimes anger will still become a factor. So stop fighting with yourself because of it and learn how to harness it instead!

PS Looking for more? You might also want to check out this post about thoughts that are keeping you broke or this one about 10 uncomfortable feelings.