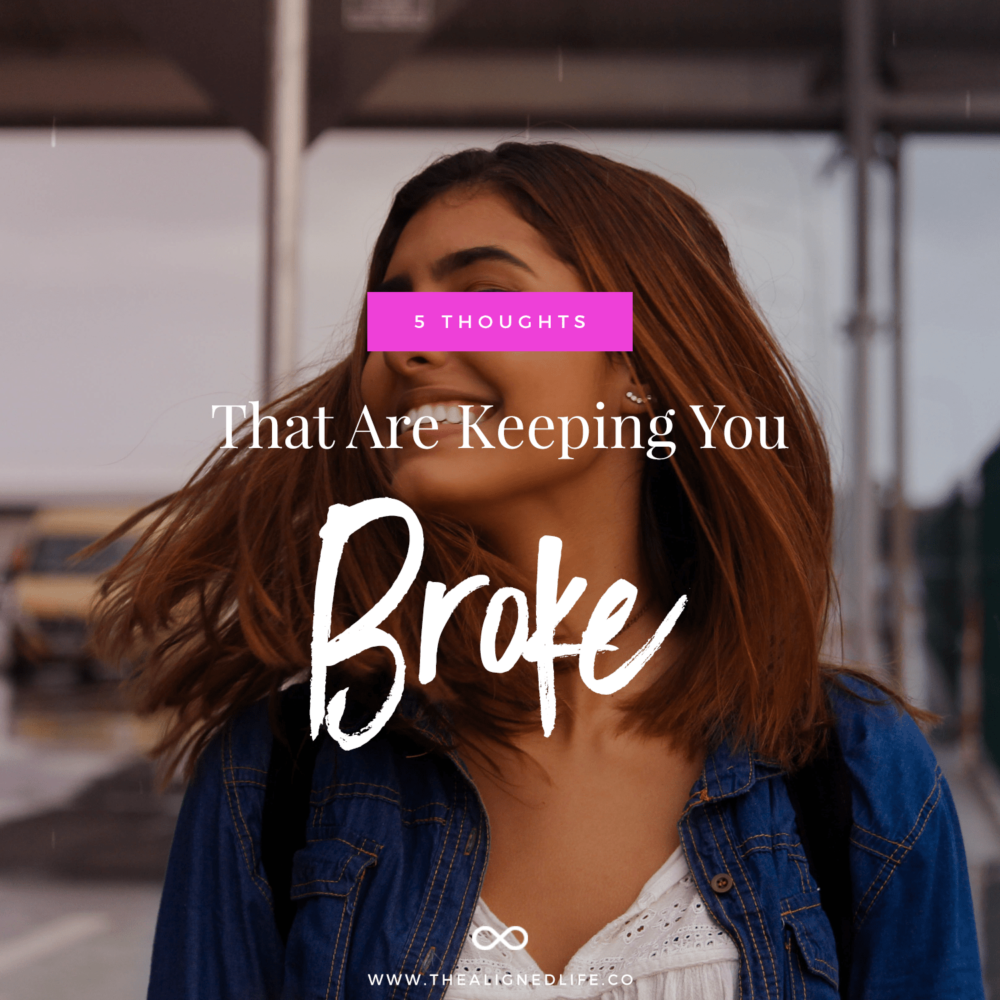 Yes abundance really is just a state of mind!

But the bad news is: so is scarcity.

So the real question is: which one are you living in right now?

Scarcity thinking is unfortunately the default for so many of us! We tend to concentrate more on what we don’t have rather than shifting to what we do. And that has a huge impact on our bottom line–maybe even to the point of keeping you broke!

How does that work, you might be wondering? Well if your brain can only detect lack in the world around you that’s the only thing you’ll be aware of. You’ll develop literal blinders to abundance and in turn miss out on some very crucial opportunities that might actually be financially beneficial to you.

One crucial area that will reveal your abundance or scarcity mentality is in the language we use, whether that’s to describe ourselves or the world around us.

Make no mistake: you’re telling the world who you are with every single word you speak! Every word is vote for your own reality.

Every thought is a tiny micro-decision, one you may not even notice that you’re making at the time. But add up all those tiny micro-decisions over an hour, a day, a week and you’ll see how they come together to have a huge impact on your life!

Most of the time, you’re probably going so fast that you don’t even notice but make no mistake: your language is always a choice. It’s conscious. And it can be very telling about what you really think is possible for yourself and and your bank account.

The way you think about the world controls what shows up for you. How can it be any other way? If you’re not used to massive abundance, you’re going to have to start working your abundance meter up in order to successfully call it in.

If right now you’re wondering if your thoughts are keeping you broke then you’re in the right place! Keep reading to find out what five of the most common scarcity thoughts are and learn how to get around them.

5 Thoughts That Are Keeping You Broke: Get Unblocked To Manifest Money

Make no mistake: any word that comes after the word “I” holds a whole whack of power! You are creating your identity with these words; you are committing to what you’re putting out there. So when you say “I can’t afford it” you’re essentially aligning yourself to the very thing that you don’t want to be true!

So how can you communicate what you need to without committing to that undesirable outcome? There’s always another way to phrase things that allows you to get your point across without surrendering your own power. How about “I’m choosing to spend my money on something else”–which is probably accurate anyway? When you have limited funds, you do have to prioritize where you’re spending your money. It’s not that you don’t have any at all; you do but you need to watch where it goes and that’s fine. Remembering that power is a wonderful way to connect with your potential abundance instead of waving it away permanently.

Think of it this way: your words are a vote that goes directly to the Universe itself! So you probably know what I’m going to say here! Do you want to always be broke? I’m guessing probably not. ????

Again, the words that directly follow an “I” statement have incredible power. When you’re stating, “I’m always broke” it’s just as if you’re putting in an order for broke-ness with the Universe itself! So the question is: does that seem like something you actually want for yourself? And if not, how could you choose some different words to express your point?

Hint: instead of concentrating on how you don’t have money now, why don’t you shift the focus to when you do? For example, “I can’t wait to buy that for myself someday”. Doesn’t that feel lighter in your body? Doesn’t placing a cosmic order for your future feel exciting? Those words of yours hold creation power! So always focus on what you really want to create!

Warning: at first this thought might seem innocuous or even accurate! But the real problem here is the message that you’re sending yourself. Your beliefs about the world have an impact on what you can achieve for yourself.

You might not think that your thoughts about other people matter to your situation! But that’s totally untrue. This thought in particular becomes a problem when you’re trying to manifest money to you. That’s because while one part of you is trying (so hard!) to attract the money in the other part of your brain is freaking the ‘eff out! It doesn’t want to be either greedy or evil–so it’s going to take care of the problem by warding away the riches…forever.

Alignment is the true key to manifestation and that really means getting all your thoughts and beliefs on board with what you really want! (aka to attract more money!) So again, the question becomes: does this belief really serve you and your goals in life? If the answer is no, then it’s time to toss this one to the curb.

“I don’t want to work harder than I already do”

This was a big one for me and I know I’m not alone on this! That’s because we’ve been taught to believe (over and over) that hard work is how you make money. And at first this belief seems to make sense. But falls apart the minute you try to scale it. So if you’re already working hard and you want more money, your money goals might seem totally impossible. (I just can’t do more than I already am!

But the truth is hard work doesn’t have anything to do with getting paid well! (If that was true every school teacher would be rich!) Money and hard work actually have very little to do with each other. But there’s one thing that can earn you more money: value. When you offer the world at large more value, you have a very real reason to raise your prices or salary. (Whereas working more hours will just leave you exhausted!)

If you want to attract in more money, then you’ll have to get your thoughts clear about this subject! Otherwise you’re doomed to self-sabotage your money efforts.

“I have money blocks”

Okay, I know what I’m saying here! Yes, I agree that you probably do have money blocks (and that’s why you’re here). But it’s one thing to look for those blocks and work through them and it’s quite another to throw your hands up and give up on trying entirely!

I get it though: just thinking that you have money blocks can become a block in itself! But again, this is your brain just playing tricks on you. When you think “Oh my God I’m blocked around money! How am I going to get unblocked?” the problem seems much bigger and scarier than it really is. But when you focus on what each block actually is–aka just one simple sentence or belief that needs to shift–then you can get your control back.

Getting unblocked around money is something everyone can do! So don’t get freaked out by the process. Dive in and work through it all, thought by thought.

So tell me: which money belief hit home the most? And which money-attracting thoughts are you going to start replacing your old broke thoughts with?

Your money story is not out of your hands! It’s being written by you with every thought, word and belief. If it’s time for you to start manifesting money and abundance into your life, then I really challenge you to start thinking about how your own thoughts might be getting in your way. You always have the power to change your thinking so don’t forget to exercise that power!

PS Looking for more? You might also want to check out this post about manifesting from lack and scarcity or this one about how to coach yourself.