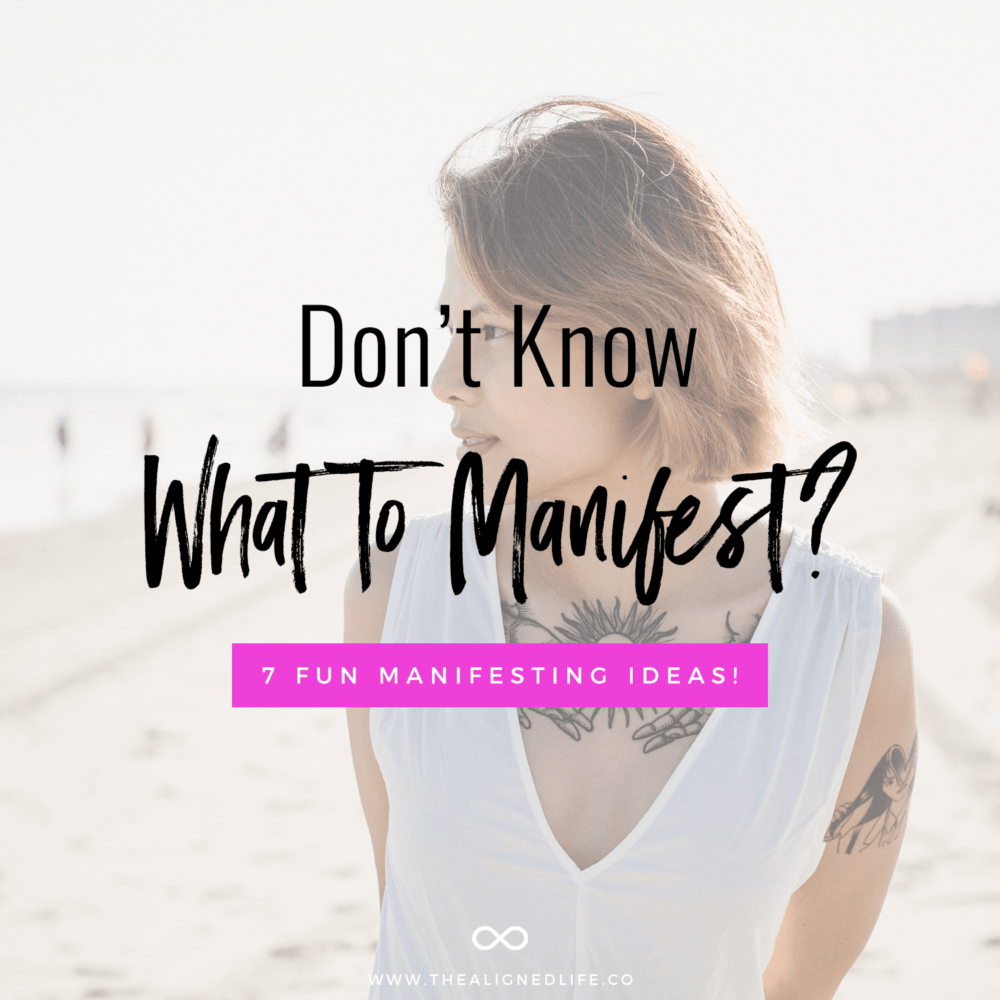 When people first discover the world of manifestation, they usually do one of two things.

1. Get really excited and set out to manifest one million dollars by next Tuesday.

2. Get really excited by the potential and then get stuck wondering “What should I manifest?”

That’s an understandable reaction of course! If you can ask for anything in the world, where exactly do you begin? 🤔

The uncomfortable truth of the matter is that a lot of us have been putting up with life As-Is: meaning we assume “That’s just the way it is!” and we give all of our power away to our current financial, romantic, or physical circumstances.

That really just means that you’re still living at cause (ie. accepting your current circumstances as fate!). But in the world manifestation, we have to train ourselves to life at effect instead! (Meaning getting sh*t done despite those “limitations!”)

This process involves means both figuring out what you want and committing to make those desires a reality.

Sadly, while it shouldn’t be a radical concept, when it comes down to it, for most of us, it is.

That means we can experience confusion or fear around deciding on what to manifest–which means that we never really try out the process and start proving to ourselves just how powerful we really are.

If you can relate to this, all you really need is some manifestation practice! Which is exactly why today I’m sharing 7 ideas for fun and unusual things that you can start manifesting today.

My intention here is to get you to have fun while you play with your own beliefs and confidence. Because if you never start, you’re never going to reap the full rewards.

What To Manifest Idea #1:

A Text Or Phone Call

Is there someone out there in the world who you’d just love to hear from right now? Whether it’s a romantic connection or not, why not play with the energy of calling them in and manifesting some communication?

To do this, just spend a few moments thinking about your target and about how you would feel when you receive the text or phone call.

As always, it’s important to connect to that energy of “it’s done” rather than to be in the state of hoping. Visualize exactly what you want and be as intentional as possible. Then release, let it go and wait to see what happens.

What To Manifest Idea #2:

If you’re in the world of spirituality and manifestation, you’ve probably already received a few of your own signs from The Universe. But until now, you probably just called them in randomly. So why not try calling them in intentionally instead?

Is there a question that’s on your mind right now? (Preferably something you want a yes or no answer on!) Then decide on what you want your “yes” sign to be. Pick something like a yellow happy face, give the Universe a solid deadline a few days from now and see what happens.

(Remember: you don’t have to force this one! If you really wanted a yes answer but didn’t receive it, maybe that’s just a tiny blessing in disguise. You’re still the one in charge of your own world. Sometimes we look for signs about things we don’t have the confidence to admit to ourselves. In those situations, it’s really the confidence you’re after, not the sign itself.)

What To Manifest Idea #3:

Who wouldn’t want a sweet treat sent directly from the Universe itself? Setting the intention to manifest an unexpected gift is super fun because it plays with the element of surprise–and that’s one thing the Universe is particularly good at!

This process also helps us to step into our true self-worth. There are a lot of “good” boys and girls (now adults) out there who have a problem asking for what they want or need, for fear of being seen as too needy or greedy. Playing with the idea that HECK YES you deserve a treat today (for no particular reason) is one way to start boosting your Havingness Levels all around.

What To Manifest Idea #4:

This one’s similar to number 2–except without the meaning attached. Sometimes you don’t need an answer to a question. It’s often enough just to give yourself a reminder that the Universe is really listening to you.

To do this, just think of a number sequence, symbol, animal (or whatever!) that you’d like to see. Then set yourself a deadline and be firm about it appearing for you.

This is best if you’re not picking something you already KNOW you’re going to see everywhere. For example, picking a rainbow, knowing that your neighbors’ have a rainbow flag displayed proudly in their window doesn’t count! (Or, at the very least, don’t count that rainbow.)

This is a fun game because so often the sign appears in a very different form than we’d expect. We think of an animal but that animal ends up appearing as a drawing somewhere. Just remember to keep your eyes open for your sign!

What To Manifest Idea #5:

An Idea Or Inspiration

Feeling stuck? Looking for a solution for a problem or a new way to handle an existing situation? This is the perfect opportunity for you to manifest the exact idea or inspiration that you’re looking for.

To accomplish this, be sure that you focus on what problem you want to solve and the date you need it solved by. Then just keep an open mind and see what synchronicities or signs are sent your way! And just remember, when you say yes to the Universe, the Universe says yes to you.

What To Manifest Idea #6:

Motivation To Finish A Task Quickly

Can you manifest more energy and motivation to finish a task? Yes, you absolutely can! If there’s an item on your To-Do List that you’re dreading or dragging your feet about, why not set the intention that you get through it quickly and smoothly?

A lot of times when we expect things to take a long time or be difficult that’s exactly what happens. So why not flip that expectation on its head and anticipate yourself having a little fun along the way?

We do truly manifest outcomes for ourselves all day long–even the outcomes we don’t actually want. (Crazy, right?) So the whole point of a manifestation exercise like this is to get you back to manifesting what you actually want.

What To Manifest Idea #7:

This one is good to do anytime, anywhere! Try setting the intention to have a good day today. This can be just as simple as declaring and deciding on it. Or, if you have a special day that you really want to go well, take the time to visualize it all happening.

Yes, just the simple act of thinking about what you want to happen can be transformational! So why not play with this concept at least a few times? Or go all out and make it part of your new daily manifestation routine.

On a final note, no matter what you manifest for yourself, take a moment to send back some gratitude. Whether you receive a Divine Wink (ping) or massive manifestation, taking a moment to stop and appreciate it is essential.

My hope is that these little games help you to have a little fun while practicing your manifesting powers. It’s time to stop scaring yourself away from your own potential and to start finding out just what you’re really capable of!

PS Looking for more? You might also want to check out this post about identity shifting or this one about how to live your best life.