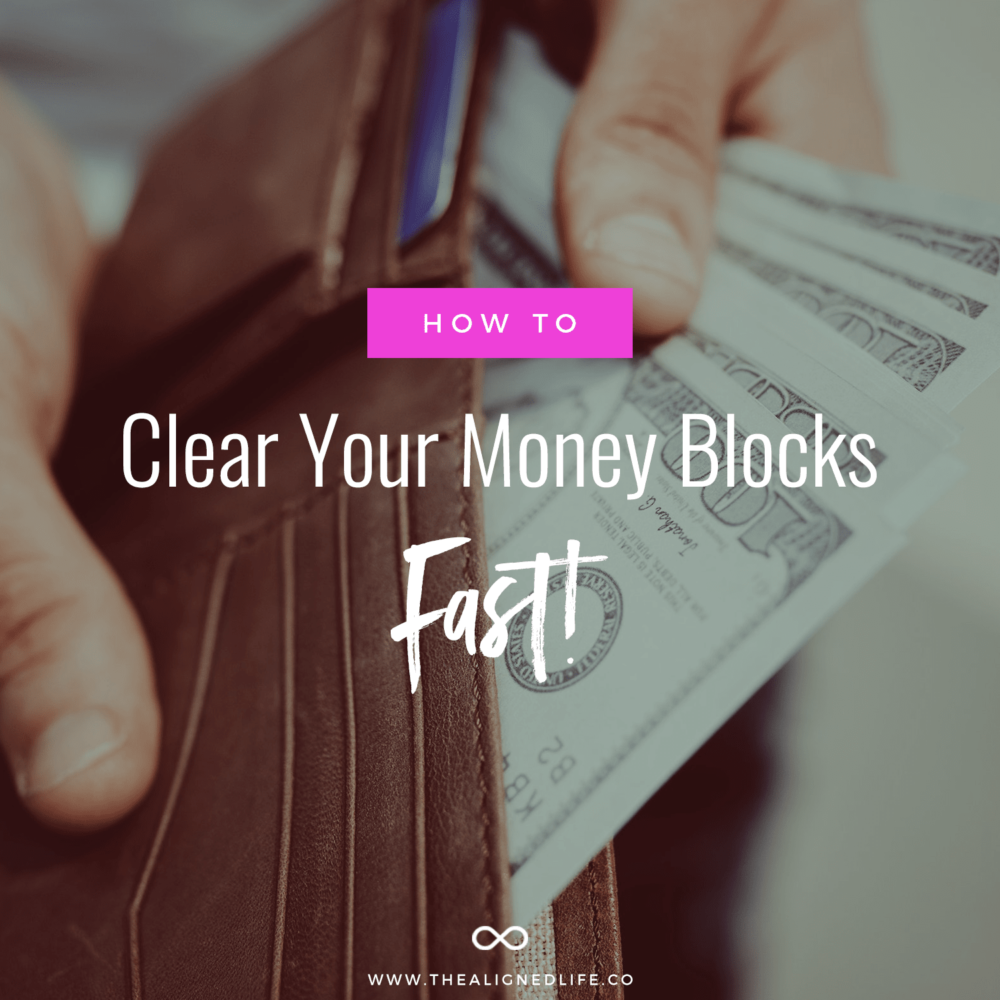 Are your money blocks holding you back from achieving your dreams?

If you don’t have the money you desire, then there’s a very good chance that they are!

Money is a necessity for modern life. It determines much of our life and even our self-worth. And sometimes that can make us feel pretty out of control.

Of course, no one wants to have money blocks. We would all love to be fully evolved people with constantly positive thoughts about everything!

But humans just don’t work like that! Without doing some inner programming and healing, our old programming will always get in the way.

However, many times, we don’t even realize what’s actually happening. After all your money blocks don’t send you a memo to tell you that they exist. ????

Most of us have a complicated relationship with money. The only real cure is curiosity and compassion! The more you can learn about your money blocks, the easier it will be to clear them.

Are you ready to bust through that old programming and make some giant leaps towards abundance? Then let’s jump in!

What Is A Money Block?

The term “money block” has become a buzzword in the manifesting world but all it really means is that you have a limiting belief that relates to cold hard cashola.

Again, maybe you even think that this doesn’t apply to you. But, as I already suggested, if you’re not where you want to be with money, then you have some work to do on your money blocks. ????

But don’t feel like something is wrong with you! This is an issue for almost everyone.

Money is a highly emotionally charged topic. We picked up many of our negative money beliefs from our families, friends and the society we live in, without even realizing it.

Our biggest money blocks are picked up in childhood–back when our subconscious mind was being formed. So of course that also means you’ve been thinking the same negative thoughts about money for a very long time–so long in fact that you don’t see these thoughts as “beliefs” but rather as unchangeable “facts”.

Today I’m sharing five common money blocks with you so hopefully you can recognize these harmful and limiting ideas in yourself!

How To Clear Your Money Blocks

Now that you’ve started to realize just how many money blocks you have, it’s time to take action to clear them. This part is all about reclaiming control of your mindset.

But just an FYI–the clearing process doesn’t happen overnight. Internal programming runs deep so it takes some time and effort to clear every money block away.

(Personally, I’ve been working with the Law of Attraction for a few years but I’m still working on my own money blocks.)

It’s also important to know that even small shifts can create huge results so stick with it and don’t get discouraged. Your future is worth it.

How To Clear Your Money Blocks Step #1:

The most difficult part of finding a limiting belief is simply to notice that you’re having one. These thoughts have been so deeply embedded in our psyche that we just assume they’re actually true–even if they’re not.

To get started, read the list of money blocks again and notice if you resonate with any of those concepts and ideas.

Here are some more questions to ask yourself: When did you first get that belief? What happened in your childhood to make you think it was true?

Become really honest with yourself because that’s the only way you’ll get to the root of the problem.

If you’re having problems identifying your money blocks, try tuning into your feelings instead. How do you feel when you’re about to open the mail? Check your email? Answer your phone? If you get even a tiny microsecond of dread or nervousness, you’re probably anticipating some bad news. So get curious. Ask yourself why. Where did that feeling of dread originally come from?

Remember that your expectations create your reality. So what are you expecting to happen with you and your money? If you’re only anticipating bad news, then you’ve got a great starting point to improve upon.

(I mean what would it feel like to expect cheques in the mail instead of unexpected bills? Why not find out?)

For bonus points, try keeping a notebook and writing down blocks as you come across them. Once you’re on the lookout for them, it can be surprising to see how many you can find. Writing them down helps keep you on track and moving forward through the clearing process.

How To Clear Your Money Blocks Step #2:

All it takes to successfully reframe a belief is to look at it objectively. We have to start realizing that each of these beliefs is just a story–and that means we can choose a new story instead.

While we habitually cling to these programmed statements, with a little deeper thought it’s easy to come up with some evidence that they’re not true.

You’re not always bad with money. (Sometimes you do really smart things. Think of some experiences.)

Money can do a lot of good in the world, so it can’t all be evil! (Write down some good things it can do.)

Hint: most definitive statements like “always” or “never” are not empirically true! Our brains just like to think that way because they’re lazy. They don’t like to expend extra energy when they don’t have to. That means they just keep thinking the same thoughts they learned somewhere along the way.

It might take a little effort but you’re always in charge of your thoughts. You don’t have to stay stuck believing things that aren’t serving you. You always have the option to choose a new belief.

As soon as you identify a limiting belief, start looking for the evidence to the contrary. With a little concentration, you can zap that money block right out of your head!

How To Clear Your Money Blocks Step #3:

Money blocks are typically focused on lack so give yourself a mental makeover to start feeling abundant again. The easiest way to quickly switch out of lack and back into an abundance mentality is to start being grateful for what you already have. It sounds to simple to be true but I promise you that it works!

No matter who you are or where you’re at in your life journey, there’s something you can be grateful for right now. (Even if it’s the roof over your head, your comfy cloud-like bed or those cute shoes you just bought.)

Remember what you focus on always expands. So always aim to concentrate on what you do have instead of what you don’t and your entire perception of the world will shift.

Bottom line: if you want to wait until your closet full of Chanel bags shows up before you feel grateful, you’re going to be waiting a long, long time. (Eeeek!)

A positive money mentality is an essential part of an abundant life. So often our own negative thoughts are what’s really holding us back from our dreams! But the good news is that you don’t have to wait to make a change. It’s all up to you to take control again–starting today!

I hope this post helps you to reframe a few of the limiting beliefs that are holding you back from your financial goals! Be brave and stick with it! You’re already on the pathway towards a better life.

Wishing you much love + manifesting miracles ????

PS Looking for more? You might also want to check out this post about how to work with crystal grids or this one about how to use visualization.