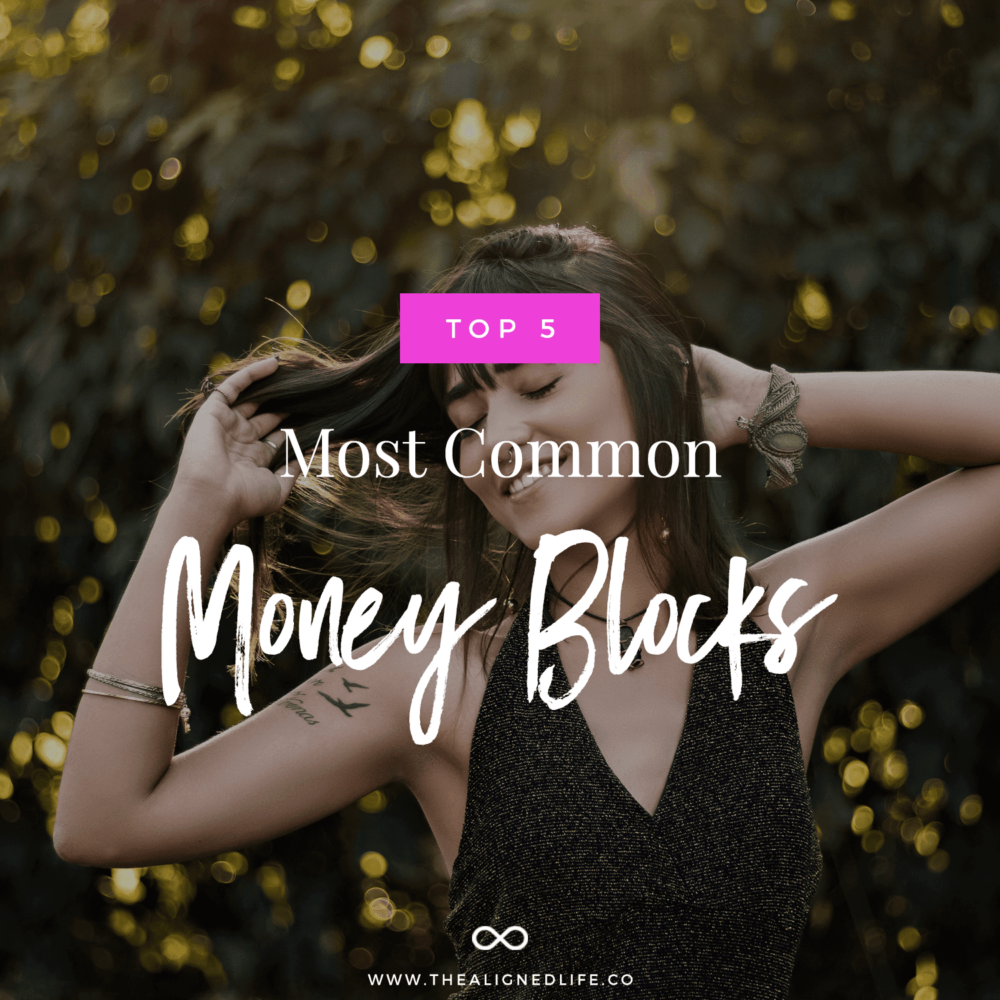 If you’ve been putting in the work of deciding on a goal, visualizing it and trying to hold the frequency, and things still aren’t showing up, then this post is for YOU. (Especially if you’re concerned about money blocks!)

The truth is that our conscious mind is only PART of the equation.

The subconscious mind is much larger than we like to think it is. I love this graphic because it shows just how much work you need to do in order to get that subconscious mind in check.

No matter how good or bad your childhood was, we all have years of programming to undo.

We all have limiting beliefs and behaviors. We all have a deep and dark Shadow side that we need to deal with.

Knowledge is always power, especially when it comes to life design, personal development and manifesting!

So if you’re trying to manifest something and it’s not working, then it’s time to do a little mental deep-diving.

If you haven’t done this truly transformative work, then you’re missing a key piece of the manifesting equation!

Since it’s difficult to banish blocks without an in-person session, I was inspired to put together this quick guide to help you banish the most common mental blocks around one of everyone’s favorite topics: money. Top 5 Most Common Money Blocks (& How To Banish Them)

This is one money block has it’s origins in the bible:

For the love of money is the root of all kinds of evil.

So let’s just be clear: that quote ISN’T calling money itself evil. It’s calling the love of money–above all else–evil. Money by itself isn’t intrinsically either good or evil. We simply assign value to money, whether on paper or in a bank. The money itself is just a placeholder, a symbol that we’ve all agreed to.

Money is always used as the will of the person holding it. Which means if a “good” person is holding it, it’ll be used for good and if a bad person holds it, it’ll likely be used for some not-so-great things. But it’s important to realize that the money itself has NOTHING to do with what it’s being used for. It’s a tool for the PEOPLE. It’s always the people set who set the intentions.

The Cure: Money can only ever make you more of YOU. It amplifies YOUR message, whatever that might happen to be. So if you’re a good person (which I’m gonna guess that you are!), then you’re likely to do good spiritual things with your money.

Think about it: there are LOTS of good things that money can accomplish in this world! So let’s give your brain some proof of that: draw up a list of 10 amazing things you’d do with your money

This block will manifest itself in the way you interact with money! A lot of people would just rather NOT deal with the in’s and out’s of money. Money is naturally powerful, which means handling it brings up a lot of feelings. It seems overwhelming or scary and instead of taming that dragon, we choose to ignore it.

But again, money itself is just ENERGY. And it literally responds to the energy that you put towards it. So if you think it’s beneath you and you try to avoid facing it as much as possible, then guess what? It’s going to avoid you too!

The Cure: If you’re ready to move past your money blocks, it’s time to get cozy with money. You’ve got to flirt with it, treat it nicely and take it on a date! It’s surprising just how quickly things can shift when you go from running away from money to creating a regularly scheduled money love-fest. Money Is Difficult To Earn

The society we live in has some very puritanical values about earning and deserving. We like to think that this is the way the world works: if you put in hard work, you’ll be justly rewarded.

But I’m sure you can think of MANY examples to the contrary! We all know someone who won the lotto or lucked into a large amount of money out of the blue. And those kinds of people typically irk us on some level. Why them and not me? Didn’t I deserve it more?

The reality is that money CAN (and does!) come randomly into our lives sometimes, without being “earned” or “deserved”. See, we don’t like seeing that happen to other people because we think we deserved it more than them! And so if we didn’t get it then we must not be as deserving.

But deserving doesn’t have anything to do with it! We need to move away from the idea of earning and deserving. So trust me when I tell you, there are people out there making multiple six-figures and working fewer hours than you do. The money doesn’t always follow the WORK. It does follow strategy and smarts. And sometimes it simply follows luck.

If you continue to think that you have to SWEAT to make money happen, that’s exactly what will keep happening! But what if it could all be EASY instead? What if money just started showing up everywhere for you?

The Cure: Conquering this block is all about changing your own expectations! Spend some time visualizing your money goals coming true without attaching the need to struggle or earn them first. Let go of your need to work so damn hard! Money miracles really CAN happen and money can flow effortlessly into your existence, but not if you’re too busy making sure that you need to put in a lot of work.

You Can’t Be Rich And Spiritual

The idea that you have to be poor in order to be spiritual is complete and utter BS. Fundamentally, it comes from a scarcity mentality: the idea that if I have more, you will have less. But we have never lived in a time with so much access to money!

So don’t let the news scare you into a fear-mentality (whether it comes to money, the government, terrorism etc.). At the end of the day, the news is there to get VIEWS to it can get advertising. It doesn’t have YOUR best interests in my mind.

Money gives you power to change the world into what YOU want it to be. Poor people just can’t make those kinds of big bold moves! So let’s face it: rich people can get shit done. I Need To Be Skinny/Married/Perfect To Be Rich

Very often the idea of being rich goes hand-in-hand with our vision of a perfect life: being skinny, in love, wrinkle-free etc.

We punish ourselves unnecessarily by thinking that the money can only come after we’ve done all kinds of other things. However, none of those things really have any bearing on the matter of money! Yet the more that we entwine the two concepts together in our mind, the further we’ll get from achieving our money goals.

So consider this as just your regularly scheduled reminder that perfection doesn’t exist! Money doesn’t really care if you’re at your goal weight or not!

Oprah hasn’t been “skinny” since 1988. But her bank account has gotten a whole lot bigger since then! What would the world be like if Oprah decided that since she wasn’t at her goal weight that she should just pack it in and go home?

You’re the one in charge of creating arbitrary barriers to your own success. But why make the journey any more difficult than it has to be?

The Cure: Spend some time imagining you EXACTLY as you are right now, only with the addition of money. In reality, that’s what gaining wealth will really feel like! Acquiring wealth might seem like such a big deal when you DON’T have it. But once you get there, it’s surprising to realize that you still feel like…you.

It’s true: manifesting DOES require more work than sitting around and thinking positive. The work of confronting your blocks and beliefs is a lot more work than The Secret let on but it also provides the most profound life changes. So it’s time to be brave and dive into it!

Good luck with it & thank you so much for reading!

PS Looking for more? You might also want to check out this post about make-over your money mindset or this one about personal alchemy.