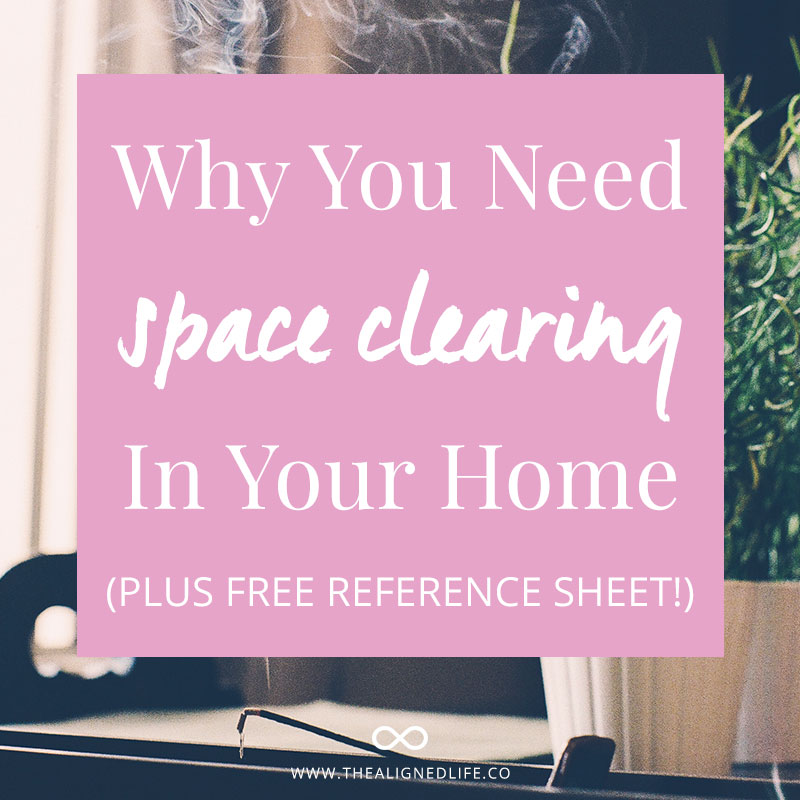 Space clearing is just as important to do regularly as cleaning or organizing your space! But most people don’t do it at all.

Space clearing (which is sometimes also called energy cleansing) does have connotations of the Woo Woo kind but that doesn’t mean you should easily dismiss it!

While space clearing is one of the most simple acts of home care it can also bring about the biggest results.

I have personally experienced the effects of energy in a space. And I’m willing to bet you have too! (Even though you probably couldn’t put a name to it at the time.)

Both of these examples clearly illustrate just how palpable energy actually is.

Now think about how much time you spend in your home.

You’re immersed in the energy of your space for hours on end.

So what kind of energy do you want to be around? Leaving the remnants of negative energy to linger around in your space is kind of like having a bath in dirty water. All that stuff is just going to keep on staying stuck to you too. (Yuck!)

Naturally for our optimal health and happiness, we should all aim to surround ourselves with energy that is calm and peaceful, not sharp, dark or draining. And there are a few easy ways to do that:

Churches and temples have long relied on smoke to help purify their space. Incense is one way to do this at home but I prefer to use sage or palo santo. (I use incense just to make things smell good!) But if cheap Nag Champa is all you have access to, then don’t let that hold you back. These instructions are open to your interpretation.

Gather up a fire proof bowl, a lighter or candle and your sage stick (or leaves). I prefer to use something like a tealight holder with a lit tealight candle in it rather than a lighter. Sage sometimes burns really easily and sometimes I find I need to relight it a few times. Palo Santo is much more difficult to light and doesn’t release as much smoke so you will probably need to relight it a few times.

But whatever smoke you’re using, it’s important to rotate through your whole space fanning the smoke into each and every corner and cupboard. Some people only go clockwise or incorporate chanting but again it’s not necessary. In my mind, it’s much more important to make the practice comfortable and practical for you rather than to try to adhere to someone else’s rigid protocol.

Salt is such an everyday object that most people don’t stop to think about it’s true potential. It might be common as chips but it also has a crystalline shape, which makes it very similar to all those fancy rocks you would find at your local metaphysical shop. And just like smoke, salt is commonly used in methods of religious worship. It’s mixed with water to create holy water in Christianity and is also used as part of Shinto purification rituals.

To use salt for space clearing in your home, you’ll need some sea salt and a bowl. Simply fill the bowl with salt and place it in each room of your home for a day or two. Time is all that’s necessary for the energy to be absorbed into the salt. Then (and this is important!) get rid of the salt out of your home, preferably by releasing it back into the earth.

Once again, churches and temples also rely on sound to create their unique ambiance. Bell sounds, gongs and chanting all have the same effect of removing any negativity from the space. Fortunately, using this method in your own home doesn’t require hiring a local monk!

Clapping is the easiest and cheapest method for space clearing with sound. Just move around your space while clapping your hands and wiling the negative energy to leave. Bells or Tibetan singing bowls are also great if you have them.

I’m particularly found of using chanting as a mini sound bath. While I use chanting in meditation practice on occasion, I also find listening to a repetitive om sound to be incredibly soothing and softening. (Try this one on Spotify.) Treat this approach as if you’re giving you and your space a sound bath: surround yourself with noise. Loud sounds also work really well! But if that’s not practical then just do what you can (I just use my tiny laptop speakers and it still works).

It’s also great if you can move the sound throughout your entire home (like you would with smoke) but if that doesn’t work, just concentrate on where you spend the most time: your bedroom, living room or office.

When do you need to do a space clearing?

While it’s most optimal to conduct a space clearing at regular intervals, it’s also extremely important to do one after any important or unusual events. Definitely conduct one after any arguments or illnesses that might come up. But it’s also great to do after something like a big party when lots of people have come into your space, leaving lingering bits of their chaotic energy behind.

I hope this little Space Clearing 101 tutorial was helpful!

PS Looking for more? You might also want to check out this post about Surviving And Thriving After A Breakup or this one about The Power Of The Token Object.