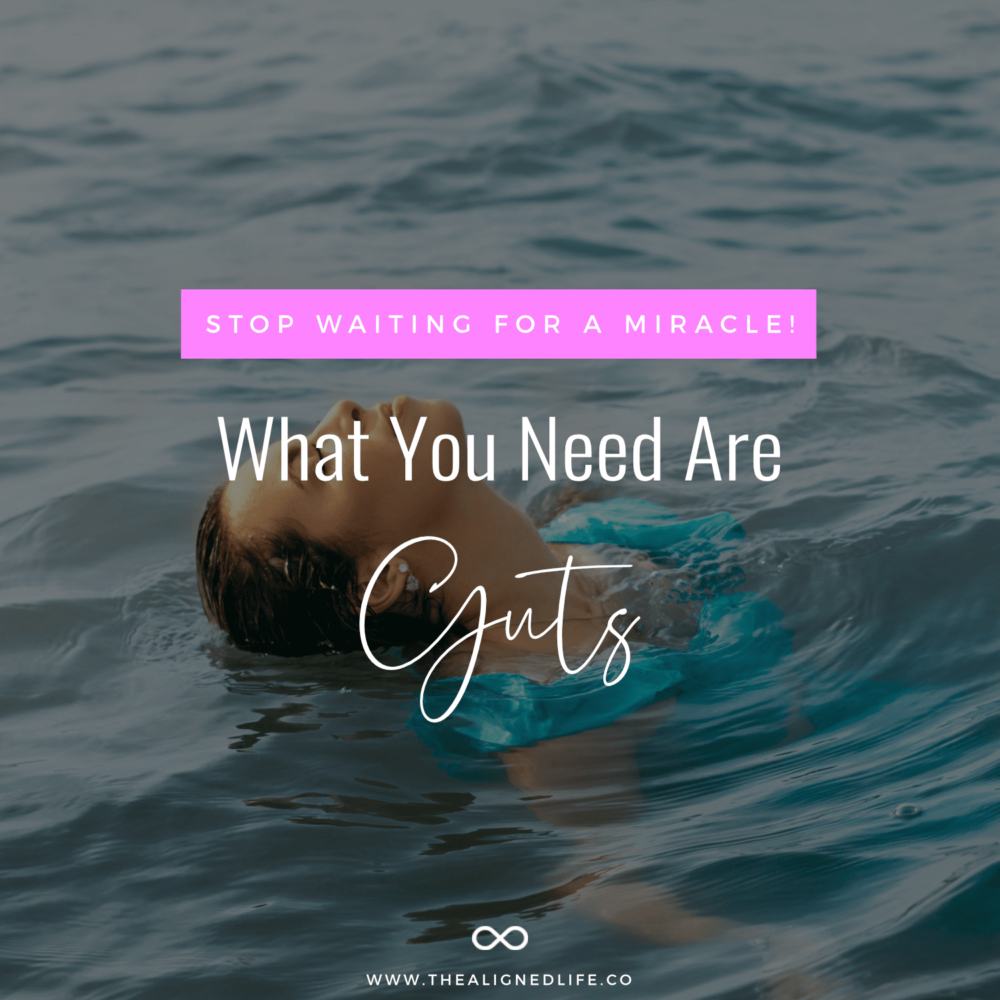 I talk about miracles all the time but what you might miss is the fact that you can create your very own miracle.

It’s one thing to know what you want in life. It’s entirely another to stop leaving everything up to the Universe, and to go boldly after that life: aka guts.

1. The Guts To Admit What’s Wrong

I fully admit this is the way in which I was stuck.

When I was at some of my lowest points, I was hoping that if I just tried a little harder or waited a little longer, some glimmer of the life I used to have would make its way back to me.

This went on for years. When it really didn’t have to be that way.

Here’s what I can see now that I couldn’t see then:

You need to admit there’s a problem before you can find the solution.

Otherwise, you’ll just end up rolling around in an endless see of “okayness” and “putting on a brave face” and “toughing it out”.

You’ll spend years waiting for something to return, that never can, because you and the world around you, has already changed.

You might even get so good at this charade of pretending to be alright, that you forget that you used to feel joy, spark, freedom.

Forgetting that you are in fact deserving of a juicy happy life is one of the worst tricks you can play on yourself. Please don’t fall into this trap.

New level, new devil, as the saying goes. That means as you grow into the person with the life that you really want, you’ll be exchanging one set of “problems” for another as you go.

However, your natural inclination will be to hold on, exactly where you are, to exactly what you have.

This is just your subconscious mind, choosing safety over the big (bold) unknown.

But it’s important to know: if you’re struggling with same issues, year after year, that might be a sign that you’ve gotten overly comfortable or stuck.

Goodbyes, endings, and boundaries should all be part of your vocabulary if you truly commit to your own happiness.

They have to be. Otherwise, you’ll be forever taking your current problems along with you.

Sometimes the answer isn’t to force something into becoming what you need. The answer is to go out there and find what really does.

3. The Guts To Love Yourself

In a world where we are told every single day that we are wrong (all of us, but especially us women, BIPOC, LGQBT+ etc.) it’s a bold act to love yourself no matter what.

Modern-day advertising is built on a foundation of shame. Right now you’re not acceptable as you are but if you just buy this makeup, perfume, or weight loss pill then you’ll finally be worthy of love.

The simple act of turning on the TV or flipping through a magazine can become a subtle cue for our own self-hatred.

Then there’s the internalized messaging we received from our families.

“Become a doctor or bring shame on the family.”

“You’d better hurry up and settle down while someone still wants you.”

“Maybe you should go put on a little make-up dear.”

These messages are so much trickier because often the person saying them does think they have your best interests at heart. They don’t see the judgment. They don’t see how their “harmless suggestions” are actually creating a system of standards that we might not want to meet (or might not be capable of meeting).

While those things are (typically) coming from love, they are definitely not doing us any favors. However, it’s impossible to go through life without the input of those around us. So it’s up to us to deflect or release the words and ideas that do us more harm than good.

My darling, you were never “meant” to fall wildly in love with yourself. Because if you did, nothing and no one else in the world could possibly hold you back.

There’s no magic pill for the world of unwanted opinions or negative programming. Instead, let every last message serve as a divine reminder that you need to love yourself, no matter what anyone else thinks or says.

You already have the big bold juicy dreams. But truth be told, you’re secretly waiting for permission to go out there and achieve them, claim them, live them.

The problem with “after” is that all too often it leads to never.

Your boss might never recognize your amazing efforts. The person you’ve been casually hooking up with for years might go and propose to someone else. The business you dream of never gets off the ground because you want to feel ready before you press “post”.

We’ve been conditioned to be allowed to go to the next grade, into the next school, into the next job. Only thing is, unlike when we were children, no one else is around to advocate for our own best interests. People might not notice all the hard work and effort you’re putting in, never mind come over to tell your unique magic is exactly what the world is missing.

Somewhere along the way, the reigns of your life got handed to you but you didn’t even notice.

So notice it now! What are you secretly waiting for? Permission? Approval? “Readiness”? Someone to secretly notice your efforts from afar, or how worthy, smart, funny, or powerful you are?

What would happen if you stopped waiting for whatever that is and just went for your next gig, job, love, business, all by yourself?

5. The Guts To Face Your Fears

One of the things I would love to tell my younger self is that fear isn’t a reflection of you.

I used to run away and hide from any situation that made me uncomfortable. But I was scared, right? No use in stressing myself out.

What I didn’t realize is that I was always stronger than any single thing I was up against. It wasn’t just those supposedly-scary moments that I was missing out on.

I was also missing out on my own growth.

Growth is ugly. It’s messy. And you’d better believe it hurts at times.

But when we don’t grow, we stagnate–and that is its own type of hurt.

Do you want to hurt yourself while trying to build the life that you want?

Or do you want to hurt yourself by never trying to live that life at all?

6. The Guts To Trust Yourself

Deep down inside, you always know your own best medicine.

You know when a relationship has soured.

You know when you’re choosing the comfortable thing over the bold thing.

You know when you’re saying yes to something you should be really saying no to.

The biggest trouble we ever get into is the trouble we saw coming and pretended not to.

What is your gut telling you you need the most?

What do you really need to do–but are putting off? (And why?)

Trusting yourself is a radical act, which goes against so much of what you’ve been taught.

What you really think of yourself and your life is the only thing that ever mattered. And if you’re not in the habit of listening to what you think (and trusting it) then now is the perfect time to start.

When you stop waiting for life to magically send you the cure, you might just be surprised at how much medicine and magic you already have inside of you. 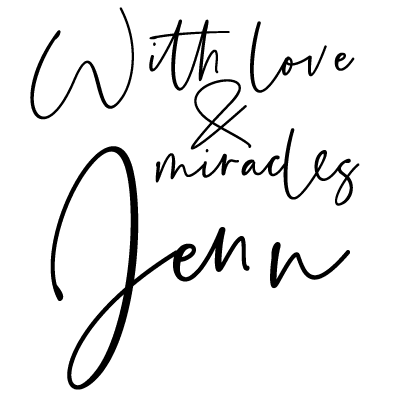 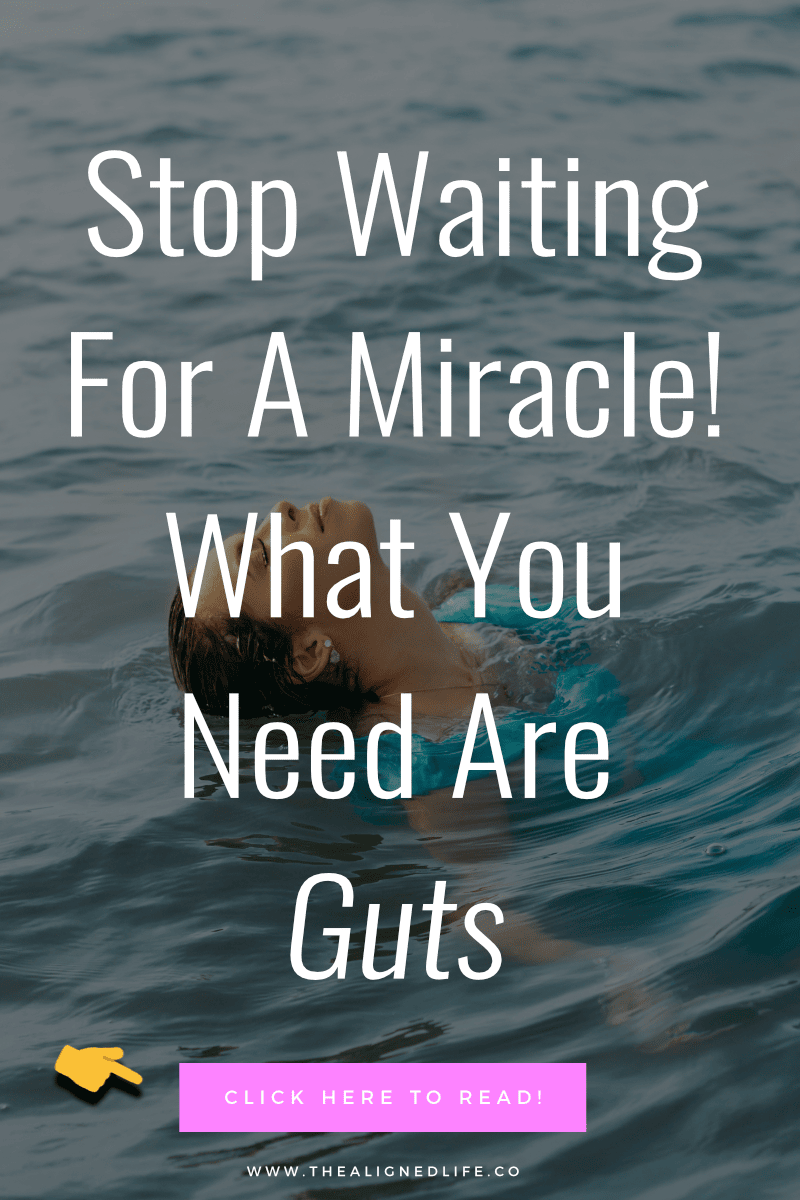