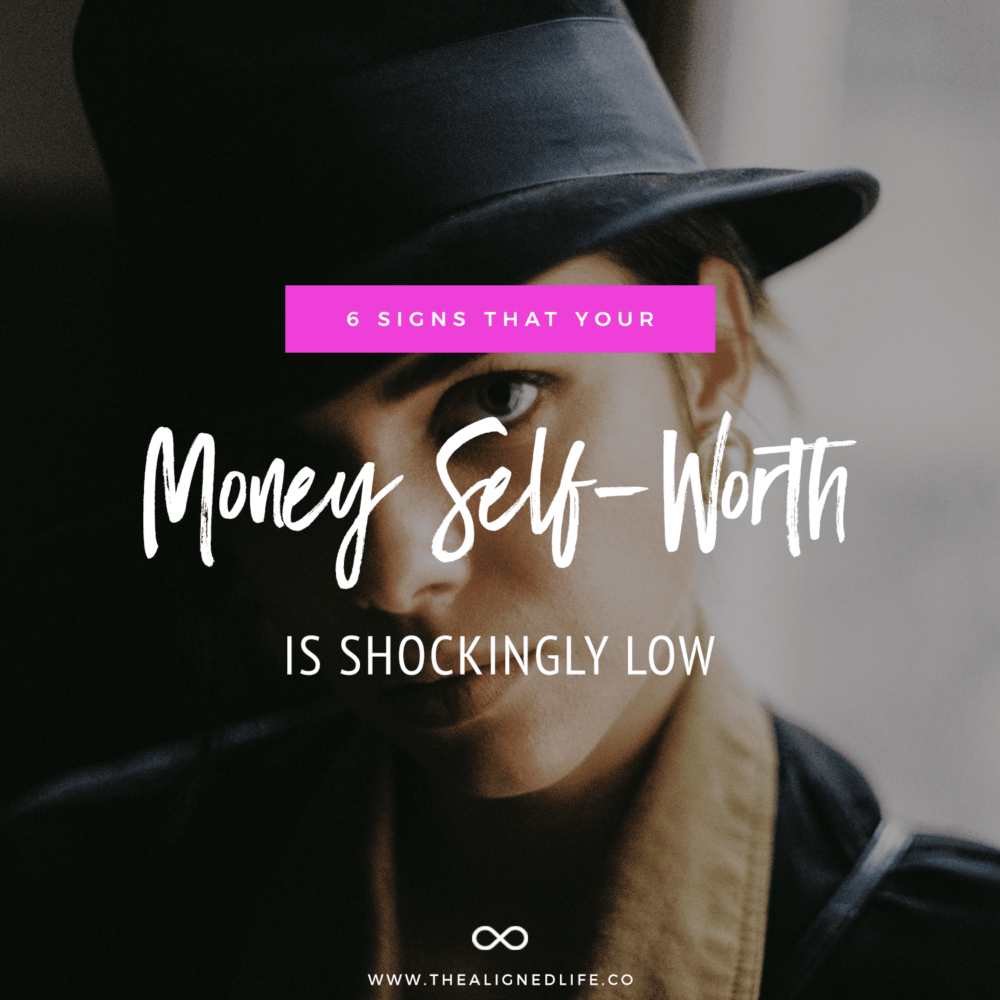 Money has been something I’ve always struggled with–to the point that being someone who struggled with money was just part of my identity.

I dreamed about making more but when it came down to actually making more of it, something always got in the way. (I couldn’t go for the job I really wanted because I didn’t have the training. My employers were cheap. The city was just too hard to make money in.) Etc etc etc.

I know that right now looking at those sentences it’s very easy to see how I was creating a story of scarcity and lack. But all of that stuff felt very real to me at the time.

And I suspect it might seem very real to you too, since you found your way to this post today!

So I really want you to know: that your money reality does not have to look the same way it always has.

We’re always the creators of our own stories. But we keep telling ourselves stories based on what’s already happened to us, instead of creating something new.

That’s just the way we were raised: with an I’ll Believe It When I See It mentality. That just makes sense to our human brains. It makes us feel like we’re doing the “right” thing.

But what happens when you believe without evidence?

What happens when you start writing a new money story that isn’t tied to your old money disappointments and negative programming?

It’s actually only when we can let go of our past limitations that we step into our true power as a Conscious Creator (aka manifestor!).

However, that’s easier said than done! When it comes to money, we all have a lot of money mindset baggage that we need to unpack.

Even if we don’t realize it! Quite often that money mindset stuff is all so well-ingrained that often we don’t even realize it’s there!

That’s the biggest problem with limiting beliefs: we truly believe in them, to the point that they just seem like cold hard facts, not things we’ve actually chosen for ourselves.

So just in case you’re wondering about whether your own money mindset needs a boost, I put together this guide to help you identity your own signs of low money self-worth.

6 Signs That Your Money Self-Worth Is Shockingly Low

You Think You Need To Win The Lottery

I’ve talked to a lot of people over the years who are all looking to manifest more money! And quite a few of those people have the exact same dream: to win the lottery.

Winning the lotto might seem like the easiest breeziest way to change your money story fast. So I understand why people desire this. But after learning more about the energetics of money, now I can see why this desire is a money block unto itself.

Many people put their focus on trying to win the lottery because they don’t believe there’s any other way they can make money. That means this desire is forming out of desperation, not true desire! They believe the power to make money is separate from them. They’re only wanting this because they don’t trust themselves enough to figure out how to make or earn more money on their own.

You Blame Others For Your Finances

I get it: the money struggle is real! And blaming other people for your current situation feels justified in so many ways.

While I’m not one to deny that there are plenty of factors that affect our ability to earn and keep money, I’m also adamant that each and every one of us take full responsibility for our money story.

So yes it’s true: maybe you grew up “on the wrong side of the tracks”. Maybe your family had money issues. Maybe your socio-economic/racial background has a history of poverty.

Those things might be very true and real! But they’re also not a complete block to your success–unless you agree to make them so.

If you believe the story that your background or education or skin color matters more than you, then yes of course that’s going to hold you back. But there are people alive here on this planet who’ve overcome all kinds of adversity–which means those excuses are not objectively real.

Yes, it’s often easier to stay angry and to play the victim. It’s very easy to identify what’s standing in your way. And it’s downright difficult to see those same blocks and to take action anyway. But that’s a choice that every person gets to make for themselves, no matter who they are or what they’ve experienced. So if you’re choosing to play the victim, it might be worth questioning why.

You Haven’t Asked For A Raise/Raised Your Prices

Haven’t received a raise in years? Or you’re tiptoeing around raising your current prices? That’s really just money fear in disguise–and a very obvious sign that your money self-worth is dangerously low.

Inflation is just a fact of life! That means our rent, food and life costs are slowly going up over time. So unless your salary is also going up over time, you’re actually going to be making less money than you were when you first began.

That might not have anything to do with you personally but here’s where it gets personal: your value is also going up over time. Even if you don’t technically get a promotion, you’ve clocked another solid year at doing what you do. That means you’ve gotten better. You’ve gotten faster and you’ve accumulated more knowledge.

It’s easy to forget all about that when everything else stays the same! But it’s true. And whether you’re an employee or an entrepreneur, you have to stay aware of your ever increasing value in the world. Ignoring or downplaying this is a very clear sign of low money self-worth.

You Don’t Earn Enough To Take Care Of Yourself

You are a spiritual being having a human experience! But money is a basic fact of being human. We’ve simply incarnated in a world where we need money to pay for things.

However, money is still a heavily-weighted emotional topic. In particular, spiritual people and women struggle with their ability to earn money. Even though money rules the world, we still collectively look down on rich people in general. We stereotype them as being evil or greedy. And since we don’t want to be evil or greedy (and therefore remain lovable) then we subconsciously push the money away too.

But money in itself is neither good nor evil. Yes, it does amplify whoever it belongs to! But it doesn’t have any weird power of its own. That means you suddenly having a bunch of money won’t suddenly become someone different.

Those money issues run deep but please know this: there’s nothing wrong or shameful in simply wanting enough for your basic needs or the needs of your family. We shouldn’t have to hide our desires or pretend to want less than we do! If you don’t feel comfortable at least asking for what you want, then that’s a very big sign that your money self-worth needs a boost.

My friends, please don’t get huffy about this one before you hear me out! I’m definitely not the Style Police over here and I do not think my friends need to own the latest Gucci to sit at my table. (I’m wearing my comfy old Lululemon as I write this, for example!)

But there’s no arguing that the way we present ourselves to the world says a lot about how we feel about ourselves.

I want you to imagine for a moment, you at your wealthiest. You’re feeling good, doing amazing things in the world. You’re standing up straight and speaking with confidence. And you’re probably dressing like you actually matter right?

So now tell me: does your Corona daytime pajama outfit match up to that image–even remotely? Do your regular outfit choices make feel like your best, brightest, shiniest self? Are you showing up as your best self at any point during your week?

It doesn’t take a whole lot to feel comfortable and confident, even if you work from home! And if this concept feels completely foreign to you, then maybe it’s time to dig a little deeper. Because if you’re currently not feeling that great about what you see in the mirror, I’m going to guess you’re also not feeling that great about what’s in the bank account either! It’s not a separate issue. Everything is connected!

You Don’t Think People Like You Can Be Rich

This one definitely applies if you have an Us Vs Them mentality when it comes to money. You always think that rich people just know something that you don’t. You may or may not like being on the team you’re on but the bigger issue is just seeing them as being two different types of people.

Of course, money isn’t everything in life! But if you have the desire for money and you fundamentally believe you can’t have the amount of money that you want, then that’s 100% a sign of low money self-worth.

Basically, you’re giving your power away to some invisible force that’s stronger than you. Because if you truly believe that you can’t ever be rich, you’re probably never going to try to actually become rich! But if wealth is something that you desire then you’re basically signing up to be unhappy forever with this type of mindset.

So tell me: which point resonated the most? What do you need the most help with when it comes to money mindset and manifestation?

Just remember that you don’t have to settle for living your same money story over and over again! Be brave, heal your money issues and give yourself permission to believe in something new for yourself. You might just be shocked at how quickly your money mindset can change!

PS Looking for more? You might also want to check out this post about abundance blocks or this one about 5 thoughts that are keeping you broke.

Did you find this post useful or inspiring? Then save this pin to your Money board on Pinterest!