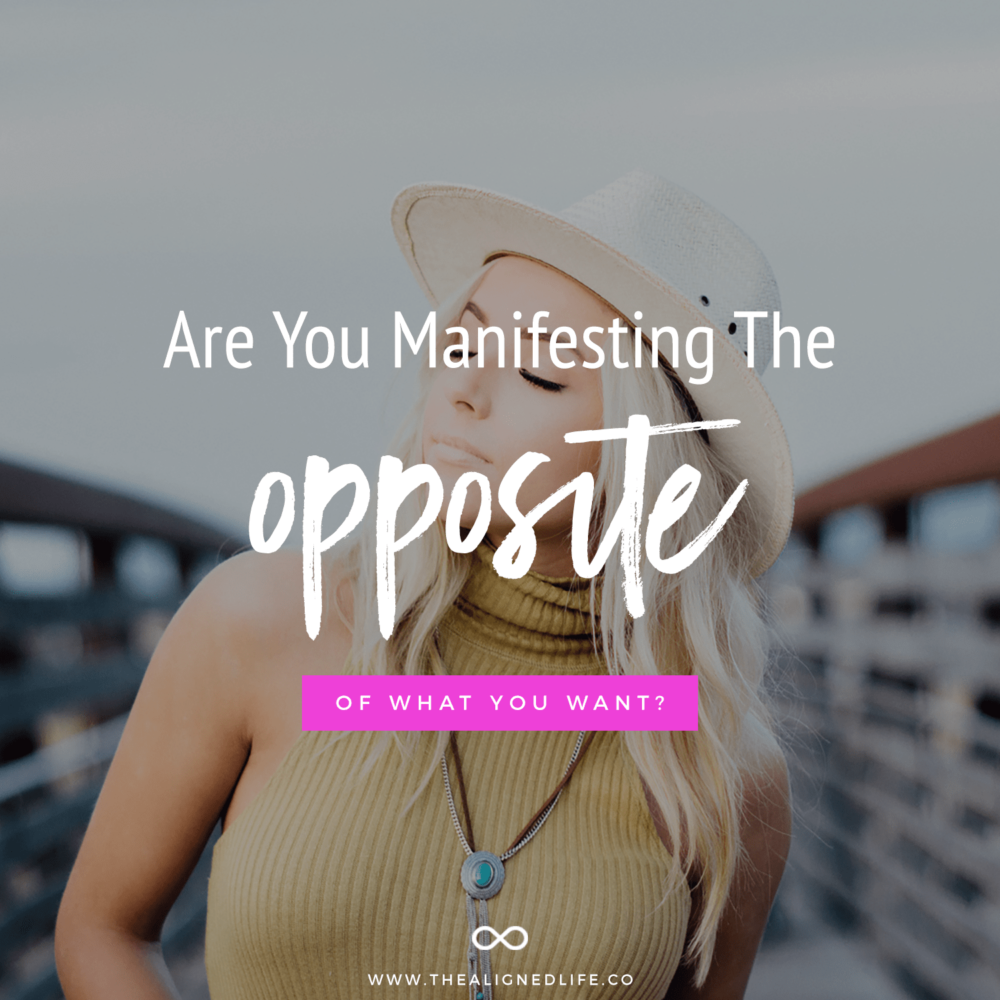 You’ve done everything right. You’ve set your intention. You’ve put it out there. And you’re waiting patiently for your manifesting wish to show up.

Right now, it seems like you’re getting the very opposite of what you actually wanted.

So how is that possible? When you’ve followed the rules and done the work, could it be possible that the Law of Attraction doesn’t work for you?

In short, the answer is no.

To explain further, let’s start by going back to the basics of the Law of Attraction.

You’re always manifesting, whether you’re consciously trying to or not.

So if you think you’re getting the opposite of what you really want, the first thing to do is to understand that the Law is working with you all the time.

You’re not unlucky or just not talented. And you certainly don’t suck! ????

We all have the exact same tools to work with!

However, there are some common traps that might interfere with getting what you want.

But before you freak out take heart! Above all, the manifesting process is all about mind over matter.

If your attitude or beliefs aren’t in alignment, then you’re going to be manifesting something other than what you really want.

So don’t fret! This is all stuff that only you can control.

So if you’re feeling like you’re manifesting the opposite of what you want, it’s time to dive in and do a little Law of Attraction troubleshooting.

Manifesting The Opposite Reason #1:

You Need To Create Space

Sometimes in order for something new to show up for us, we need to create space for it. Trust that this is not a mistake but actually part of the process!

There are some hard limits to this human life. Our homes are finite. The amount of time we have in a day or our lifetime is limited. So we can’t keep adding more things on top of what we already have. We have to trade out some of the things that aren’t working for us for ones that do.

When things start to exit your life stage left, it’s easy to get fooled into thinking that something has gone wrong! But relax! Everything happens with divine wisdom and timing. Deeply know that there are forces much wiser than you at work behind the scenes. So keep surrendering to the process, instead of freaking out and trying to stop it!

Manifesting The Opposite Reason #2:

Your Manifesting Is Only Just Beginning

When things start to go wrong, your manifesting journey has only just begun! Can you set aside your fears and believe with your whole being? Can you look at evidence to the contrary and still know that you’re going to get what you want? Because this whole process is about exactly that!

If you’re panicking and experiencing fear around your intention, you’ve fallen out of alignment. So set aside some time to reconnect with your desire and your faith (in both the Universe and yourself). The Law of Attraction exactly knows what you’re feeling deep down inside. So if you’re operating from a place of fear, you’re dialing up the Universe to place your fears right in front of you!

The mental switch is inside all up to you. Take some time to visualize and feel into your happy imagined future. Remember that feeling always comes before the having! So if you’ve stepped out of your deep knowing and into fear, then you know what to do.

Manifesting The Opposite Reason #3:

You’re Actually Focused On What You Don’t Want

Very often people think they’re focusing on what they want, but they’re actually thinking about what they don’t want much more! Again, this is a matter of tuning into yourself and your real feelings and expectations about what’s going to happen for you.

For example, you’ve set the intention to make a certain amount of money this month. But the end of the month is nearing and the money hasn’t shown up. So you start thinking more and more about how it’s not here!

Your expectation is everything! So if that sneaky little inner voice keeps saying “This will never work for me” then guess what? You’re right!

Start by sending yourself some love and compassion. Losing faith is not the end of the world! To fix it, focus on being grateful for everything you already have and you’ll flow easily back into the feeling of having instead of lack.

Manifesting The Opposite Reason #4:

Another common issue is envisioning your wish in the future instead of the present moment. If you’re imagining your intention coming true at some future date, it will continue to remain right there–in the future!

Manifesting isn’t about thinking ahead. It’s about creating the feeling of having in the present moment. So if you’re wishing long-term, it’s time to turn your attention to what it would feel like to have your wish right now.

Visualize it as being real. Visualize what it would really feel like to have your wish be part of your reality, as a part of your everyday life. If you can make it feel as real and as tangible as if you had it right now, you’ll be back on the right manifesting path.

Manifesting The Opposite Reason #5:

The Excitement Has Worn Off

Excitement or exhilaration is the Fool’s Gold of the manifesting world! It can be easy to confuse excitement with high-vibrational energy. But in reality, excitement is not a long-term emotional state.

Losing your excitement about your desire is definitely not a sign that your manifesting isn’t working! It’s easy to confuse waning excitement with thinking you’re doing something wrong but the two are actually very different.

Too much excitement is actually a sign that you’re still far from being aligned with what you want. Even when your intention comes true, you won’t stay in the excitement zone forever!

It’s only when your desire feels normal–when it feels natural, when it feels expected–that you can be in alignment with your desire coming true! So again, focus on how it would really feel for your wish to be part of your world and not on those fleeting Lotto Winner-feelings.

Manifesting The Opposite Reason #6:

You’re Not Ready To Let Go Of Where You Are

Sometimes while we think and say we want a change, deep down inside we’re actually pretty darn comfy staying exactly where we are! This becomes obvious when your actions are interfering with your intention.

Here’s an example: Say you’re looking to manifest a new relationship. But every weekend you’re spending out with your friends gleefully talking about everything that’s supposedly wrong with the men in your city.

Do you see the disconnect? While on one hand, you’re totally unhappy with where you are, on the other you’re also deeply enjoying it. You get to go out and bond with others over it. You get to one-up each other with your tales of woe. Talking about the shitty situation has actually become part of your routine!

If you’re offering these types of mixed messages to the Universe, your true desire is getting lost in the shuffle. First, you need to look at the dark side and figure out exactly what you’re getting out of not being where you want to be. After that, it’ll be easier to move into alignment with your desires, dreams and actions all focused on the same ultimate goal.

For me, the coolest thing about manifesting is knowing that it’s always under your own control! So even if it looks like you’re manifesting the opposite of what you want, take heart and tune into yourself. The power is always within you.

Thank you so much for being here & have a beautiful week. ????