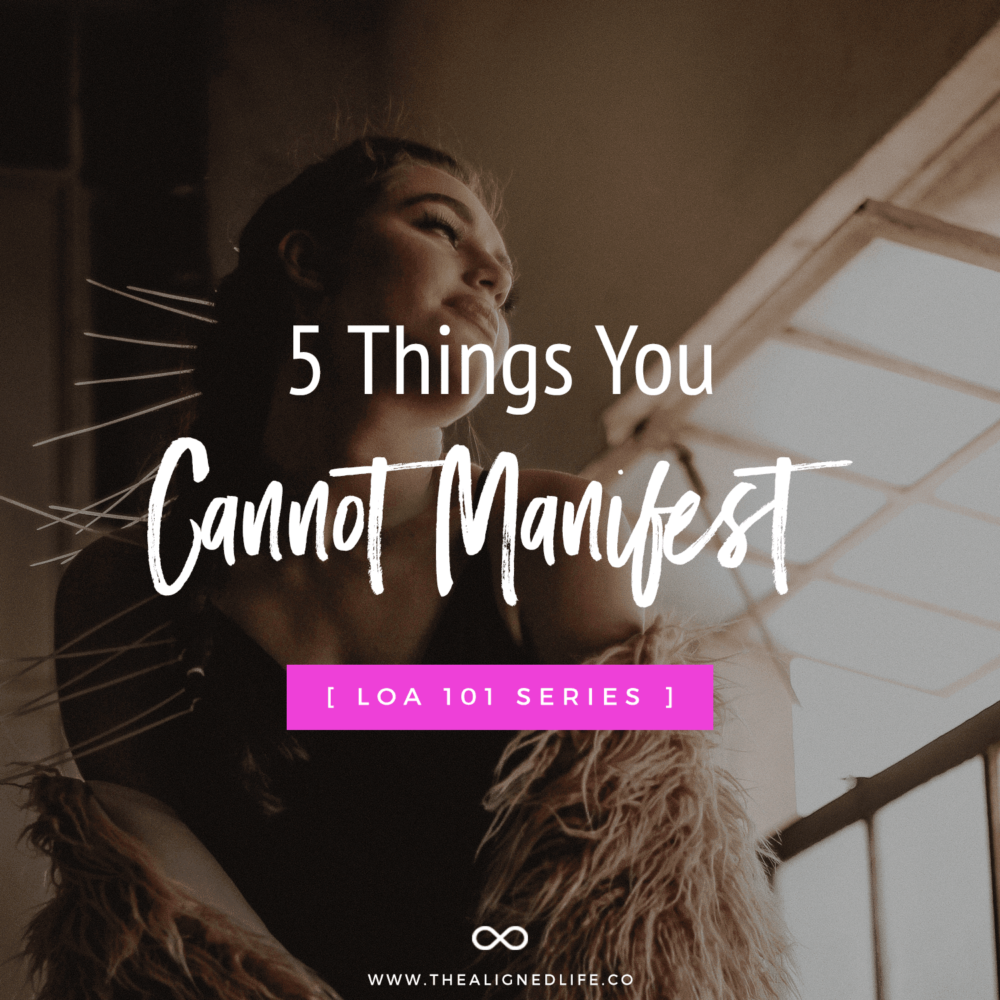 Manifesting is so exciting! After all, who doesn’t want do design a life they’re wildly obsessed with? But there is something you #manifestationjunkies have to watch out for: that’s trying to manifest the impossible.

Look, I’m not someone who wants to rain on your parade! My job here on this site is truly to empower you and motivate you to start consciously creating your own life.

In general, I want to focus on what you can do instead of what you can’t! But I do get asked about these topics from time to time so I thought it would be helpful to do an entire post about it.

Sometimes the things we’re trying to manifest simply fall outside of our own power.

So if you’re asking for something big and you’re feeling frustrated or stuck, perhaps it’s time to check and see if your intention falls into one of these un-manifest-able categories.

Of course, I’m not getting in the way of your free will. That means you can go right on ahead and attempt any of these things if you’re truly determined to. I certainly won’t be stopping you! But I also want to explain why you might not find success.

So let’s get clear about what those things are so that you can get back to focusing on the things you CAN manifest:

The 5 Things You Cannot Manifest

The Laws Of The Universe

I love to tell people they can manifest anything they want in life! But that’s not entirely the truth. There are some very solid laws of the universe that simply can not be violated, no matter how much you desire them to be.

Even with all the faith in the world, you cannot change the laws of physics. You can’t be in two places at once. (Well, maybe while you’re dreaming but that’s another story.) You can’t fly. You can’t paint the sky green!

This might all sound ridiculous but it’s very much worth mentioning. While I don’t run into that many people trying to fly, honestly some of the things that I see people trying to manifest are essentially the same thing!

There’s a big difference between trying to manifest a beautiful life for yourself and trying to rearrange reality to suit your ego. So ask yourself: are you trying to change the past? Are you fighting hard against something that’s already happened? No amount of manifesting in the world can change history! We all just have to accept the world for what it is and work forwards from there. There’s no point in banging your head against a brick wall about something that’s already set in stone.

You have an incredible gift here on earth: total and complete autonomy over your own life!

The only problem? Everyone else has that same gift too!

Yup! That means attempting to control the people around you is just violating their own free will. Trying to make people do things solely for your benefit will often meet with mixed results. Changing someone’s thoughts, feelings and behaviors is an incredibly difficult thing to do–and if you do manage to succeed, it will have it’s consequences.

This most often comes up when people are trying to manifest a specific person to fall in love with them! Again, I won’t flat-out tell you not to attempt it. But truly think about the consequences of your actions. If the person you’re trying to manifest is already in another relationship, then you’re actually affecting three people, not just one! (That’s why I always suggest trying to manifest the best person for you instead of messing with other people’s lives.)

Your Own Karmic Path

Certain elements of our life have been set in stone. These are our karmic paths. Many of the circumstances and obstacles we face were chosen specifically for us to experience! So no amount of manifesting can change them.

You chose to come into this life, in the time and body that you did. We’ve also chosen our parents (yup!) and most of the important people in our life. These are our soul families: people we’ve incarnated here with over and over again.

Our karmic plan also involves our eventual death. Some day our number will come up and manifesting cannot get you out of it! In Western culture, there’s a lot of hand wringing about this fact. Everyone fears the unknown and death is the biggest unknown of all! We also fear pain and suffering. So it’s natural that some people will try to manifest away their own end. However, that just won’t work!

So why not switch the focus back to what you can control? You can manifest health and an amazing body and all those wonderful things. Choose to live the best life possible in the time we have here (and in fact remembering that it’s short will put so much of life into true perspective).

As we already touched on, you can’t manifest for anyone else anyway! (If they don’t want to do put in the work, that’s their choice!) But to take it one step further, you definitely cannot no-way no-how change someone else’s karmic path.

That means you can’t change someone’s core struggles, their families, their children or their deaths. It’s so tempting to think that because we love someone we know what’s best for them! But some of the elements of life are simply not our human hands to control.

If you’re desperately trying to “fix” someone else, this can be a tough lesson! But you will find so much peace when you step back rather than trying to change the immovable.

The more complicated you make manifesting, the more difficult it’s going to be! While most of us know this, I still see so many people who not only want to manifest something but also want to control all the details around how it shows up. And that, my darling, is just Too. Darn. Much.

Typically, when we’re trying to control so much of the world, it’s because we don’t truly believe in ourselves or the Universe. If you’ve ever encountered a control-freak in real life, you know that there are some fundamental trust issues going on beneath the surface! The same applies to manifesting.

The attachment to controlling every detail is a sign that you’re simply not in alignment. You cannot let go and trust because you fundamentally believe if you do, things will fall apart. That’s a pretty exhausting way to go through life and a very poor place to try to manifest from.

So if you’re spending time designing all the the details of your manifesting intention, it’s time to take a step back. You have to leave some room for the magic to surprise you and that’s awfully difficult when you’re micromanaging everything!

I hope this post sheds some light on the limitations we must all face in this human world! Again, this isn’t intended to be a Negative Nelly post. Rather, I’d just like to shift your focus back to what you can control rather than wasting your time and energy on the things you can’t!

Thank you so much for reading and, as always, let me know your thoughts and questions below!