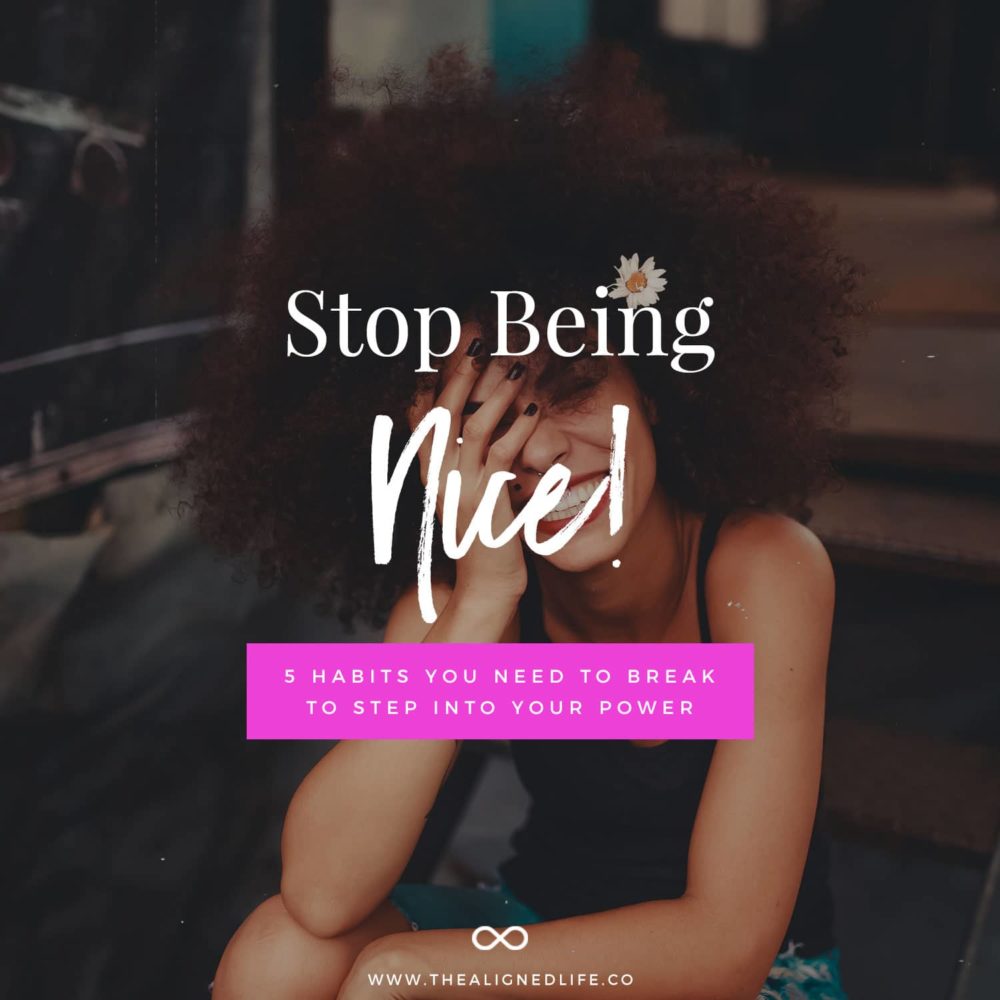 Are you too nice? As funny as that might sound, being nice really can be the culprit behind many of our life problems.

While developing empathy and learning to play nicely with others is obviously important, all too often this forced nice-ness also comes at a high cost.

The Nice-ness Myth seems to go something like this: if everyone put everyone else’s feelings first, then we’d never actually hurt each other. But of course that just isn’t the case! Hurt feelings are actually not the result of other people’s actions. They’re created in our own minds.

So until we learn how to manage our own emotions, we’ll be at the mercy of those around us–leaving us feeling powerless and like a victim.

You are always your own best advocate! No one else can prioritize your happiness, your needs or your feelings. So if you’re running around making everyone else happy, who’s going to do the same for you?

We also think that by being nice we can make other people like us. But sometimes that’s just passive aggressive behavior. We can’t control people through our nice-ness (no matter how hard we try!). Plus being too nice can actually have the side-effect of turning people off. If you’ve ever met someone who was just too eager to please, you know how disconcerting it can feel. That’s because it’s clear that the nice person is hiding their real thoughts and feelings. It creates disconnection and makes us mistrustful.

We all crave real connection with each other. We all just want to be seen and accepted for who we really are! But if you’re putting on a fake persona and diminishing your own magic, then you’re also cutting yourself off from this ever being a possibility. It takes bravery to walk through the world as your authentic self–but ultimately that’s the only path to true happiness and freedom.

Ultimately, we’re here to live our best life and to make ourselves happy. If you’ve spent too much time and energy on being nice with little to show for it, then start the journey back to true self with these 5 habits to break.

Stop Being Nice! 5 Habits You Need To Break To Step Into Your Power

People pleasing might not sound bad at first glance. Who wouldn’t want to make the people around them happy? But people pleasing is often taken much too far and can be an indicator of low self-esteem. After all, if you’re more interested in pleasing those around you than yourself, what does that say about your own self-image?

The truth is having an opinion and needs of your own doesn’t diminish you as a person. They’re actually a good thing! Think about the last time you tried to find a restaurant with someone who insisted upon having no opinion and “being easy”. In this case “being easy” just puts all the work squarely on the other person–which isn’t exactly fun!

Ultimately, we all want to please those around us–but that also requires other people telling us what they really want! If you’re not comfortable voicing your own preferences, then you’re denying everyone the chance to do this for you.

Not Asking For What You Want

One of the common symptoms of being too nice is an inability to ask for what we really want. Instead of negotiating IRL, we’ve already started negotiating in our mind. We ask for a compromise instead of what we really want because we’re too focused on what the other party wants (or what they will think of us). But that requires a whole lot of assumptions on our part. (And you know what they say about assumptions!)

If you never ask for what you want, you’re never going to get it! Besides, if your partner isn’t even aware of what you really want, they’re bound to miss the fact you’re already making a compromise. That will only leave you feeling taken advantage of in the end.

Of course, life isn’t perfect. Voicing your preferences doesn’t guarantee that you’ll actually get what you want–but that’s almost besides the point! We all still have to negotiate in the real world. However, being truthful and direct about your own preferred objectives is the best way to enter into any negotiation, personal or professional. It’s the only way to begin advocating for yourself.

Boundaries aren’t a guarantee but they do help to create a safeguard. Ultimately, you can’t control anyone (and boundaries aren’t meant to be used as a manipulation tactic). But they will make any real problems float to the surface. If you’ve expressed a hard boundary and someone continues to violate it, then you have a very good picture of what they think of you.

Do you say sorry far too often? I know I do! (And hello fellow Canadians and Brits!) But this is just another way to play small and to put everyone else first.

Apologies are of course necessary at times. But some of nice people make them far too often. (ie. Apologizing when people bump into you! Maybe that’s just a Canadian thing. ????)

However, you shouldn’t feel the urge to apologize unless you’ve actually done something wrong. We all have a right to exist on this planet; sometimes over-apologizing shows that we don’t think our presence or needs are truly important. So before you jump to saying “I’m sorry” please take a moment to pause and ask yourself: did I really do something wrong here? Or am I just trying to make the other person feel good? If you haven’t done anything wrong, then stand up for yourself by not saying it.

There’s one person and one person only who gets a say in how you live your life and that’s you. Of course it would be nice if others in our life always approved of us! But that will simply never happen. So it’s important to realize that while it would be nice to have, ultimately we don’t need anyone’s approval.

It’s all too easy to fall into the validation trap if you’re not in your own full self-worth. But that’s just because you’re holding other people’s opinions higher than your own. In reality, while we’re all unique and powerful in our own way, we’re all equals. No one is better than anyone else! We’re all just different. So why hold someone else’s opinion higher than your own?

Constantly needing that outer opinion is exhausting. Because no matter how many nice words you hear or how many people tell you you’re great it will never be enough. Until you fix the self-worth demon itself you’ll be trapped in a pattern of neediness forever.

So tell me: how are you being too nice in your life? What habits are you going to break to create a safer container for your own happiness?

Ultimately, you are your own best judgement! If “being nice” is leaving you feeling drained and under-appreciated, then you know it’s time to set some new boundaries.

PS Looking for more? You might also want to check out this post about 8 reasons why your manifesting isn’t working or this one about how to manifest through decision.