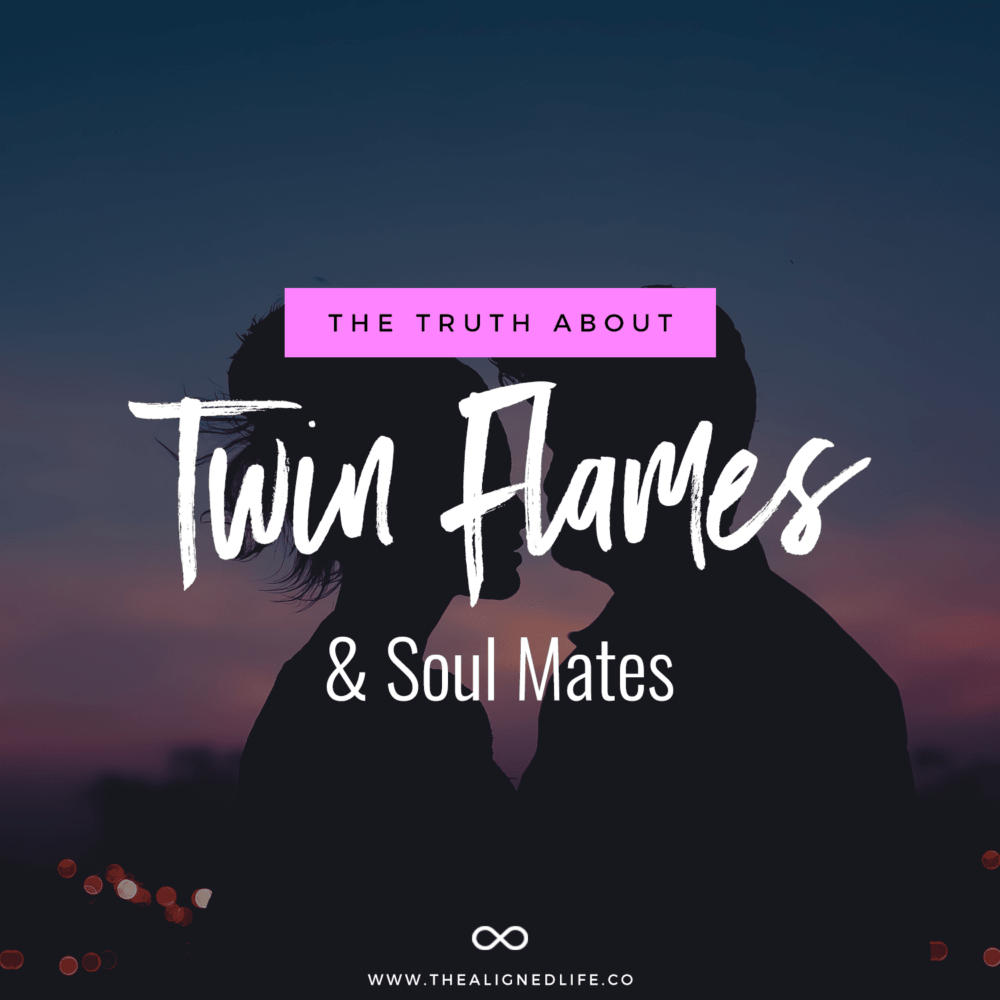 Today’s unpopular spiritual opinion: there’s no such thing as a Twin Flame.

I know it’s super trendy right now in the spiritual world to talk about your Twin Flame. But 99% of the time I see people using the term “Twin Flame” to justify some very un-spiritual BS.

If any of those scenarios sound familiar, then it’s a giant sign that you have some inner work to do. Your ideal romantic relationship won’t magically happen with a person who is treating you badly.

The bigger question is why would you want to settle for that type of behavior? After all, you are the Conscious Creator of your life. YOU get to decide who gets access to your mental, emotional and physical space.

Buying into this idea is incredibly limiting and bad for your self-esteem. It’s just a spiritual way of talking about the old idea of The One–an outdated idea that we would all do well to leave in the past.

I know this isn’t a popular opinion. And some of you might click away before reading this right now!

But if there’s just one of you out there that I can save from the Negative Emotional Rollercoaster that is a toxic relationship that you’re calling a Twin Flame, then this will have been worth it.

So without further ado, let’s learn more about Twin Flames, Soulmates, and all the reasons you should throw this idea in the spiritual dust bin for once and for all.

What Is A Twin Flame?

The definition of a Twin Flame is that there is one soul separated into two physical bodies. It’s like spiritual twin-dom!

Finding that one person who understands you completely is the romantic goal we’ve all been sold, but it really only feels good when that other person is around and invested! Otherwise, it feels pretty terrible to buy into this idea. (And this is the very definition of leaving your happiness in someone eles’s hands.)

What Is A Soulmate?

The definition of a soulmate is basically anyone who you’ve encountered through a previous incarnation. We all have a “spiritual family” so to speak: meaning, we cycle through each incarnation interacting with the same souls in different human forms.

That could mean your mom in this lifetime was your husband in the last etc.

These people are around you to help you work through your karmic (soul) lessons. They’re here (in part) to mirror you and test you.

(Remember, we’re here to experience life, to solve problems, and to grow–not just to have everything be rainbows and unicorns 24/7.)

The soulmate relationship is not always romantic. In fact, most of the time it isn’t. But the good news is you’ll find your soulmates everywhere: in your classroom, in your family home, in line for the bathroom in the club (lol! 😂). So please don’t ever feel that you’re doomed to loneliness while you go out and look for them or wait for them to find you.

These people are an important part of your journey, whether they’re in your life for a long time or just a short moment. But you don’t have to search them out, as they’re already all around you.

Why I Don’t Believe In Twin Flames

My spiritual beliefs can be boiled down to a non-dualistic perspective. That means I believe that we’re all source consciousness. You’ve cycled through actually being every person who’s alive now and everyone to ever exist (plus animals, plants etc.)

From this perspective, everyone is a soulmate–and twin flames can’t exist. There is no singular perfect other half of your soul because you are everyone and everything. Part of your soul is split up but this one person is not the only other person who has it.

I’m also always talking about the importance of choosing abundance over scarcity, only always. I equate abundance with love and scarcity with fear and lack. And every spiritual truth goes back to love and only love (as fear is something we create in our minds).

So think about it: if you’re absolutely convinced that this one person (and only this one person) can fulfill you, then how is that going to shape your world if they’re either (a) not in it or (b) treating you terribly?

Most people I see using the words Twin Flames to justify their situation are actually just living in fear and lack mentality. If they knew there were other ideal matches out there, why would they waste so much time and mental anguish trying to make a square peg fit?

I will always challenge my students and clients to find the most loving perspective from which to create their reality. And most of the time, Twin Flames do not fit what’s really best for us.

It Can Make You Manifest The Wrong Things

I still get soooo many comments from people who just want to manifest this one specific person. Again, sometimes these people are absolutely convinced that the dude that just ghosted them (and is dating someone else) or the person who completely ignores them in public is their Twin Flame.

Let’s get clear about two things:

1. Manifestation can be manipulative AF.

Trying to get someone to fall in love with you is fundamentally not respecting that person’s boundaries. Using magick or manifestation doesn’t absolve you from having a conscience. (Ahem! I see you girls trying to manifest becoming a billionaire. 👀)

2. We’re writing our own stories.

What happens if you say “Hey Universe! I love this! I want more of this!” and the This that you’re talking about isn’t actually isn’t that great? Why amplify the vibes of something that isn’t meeting your standards? You’re never going to change them to be exactly who you want them to be, no matter how hard you try. But you can call more of them (or people of their ilk) into your life. Be real about whether or not that’s a good thing.

I see a lot of beautiful, smart, funny amazing women settling for peanuts in the relationship world and buying into a concept like Twin Flame only further enables this self-destructive behavior.

Anxious, grasp-y, Choose Me energy is not a sign that you’re in your power! In fact, it’s giving all your happiness away to this other person.

If things are going well, that might sound pretty good! But we never get to control anyone. Sometimes people just grow apart or figure out that they’re not as great a match as they previously believed.

But if you’ve put all your hopes of happiness on this one person and they leave, then you are dooming yourself to feeling unhappy and unfulfilled forever.

However, if you truly believed you were an amazing person, this one specific romantic relationship is longer the only barometer of your happiness. It’s simply a Nice To Have–an accessory for an already amazing life. And if the relationship at some point becomes no longer Nice To Have, then you can get yourself back out there and find one of the other (many!) amazing matches who are looking for someone just like you.

Knowing your worth and always believing in the possibility of more is true abundance mentality when it comes to love–not chasing, settling, or manipulating.

We’ve all had that magical instant romantic sensation: that feeling of knowing someone you just met way better than you actually do. “This feels so familiar! It must be meant to be.”

It’s not that I don’t believe in magic coincidences. I definitely do, especially when it comes to love!

But unfortunately, most of the time that Love At First Sight phenomenon is actually just Trauma Bonding.

Trauma bonding happens when there’s something about this person that reminds you (on a deep hidden psychological level) of something you experienced in the past. This is uncomfortable to admit but true: most of us seek something in our partners that echoes something about our parents or primary caregivers.

For example, think of the typical “Daddy Issues” (which are super common, and nothing to be ashamed of BTW!).

Say a girl grows up with a father who’s a bit emotionally distant. Her attempts to feel securely loved as a child failed. But now she’s a grown-up and here comes a potential partner that also feels emotionally distant. Instead of becoming the big red flag it should be, it feels like home: because that’s what she experienced at home.

But her subconscious brain is convinced that this time will be different. If I just try harder, lose some weight, become the perfect partner, then this person will love me in the way I’ve always wanted to be loved.

But unfortunately, it rarely works out.

(There are similar dynamics at play for the men too FYI! But I’ll speak more about that another time.)

When we experience that familiarity, it’s so tempting to call it something like Twin Flame. But using that term will just typically blind you to the reality of the situation–which is not being treated well or settling for way less than what you want and deserve.

Twin Flames Are An Immature And Unrealistic Romantic Perspective

We still live in a society that tells us we need to be in a relationship to be a happy and successful adult. Many people would rather be in the wrong relationship rather than be single! The concept of the Twin Flame just further exacerbates this idea. When we truly believe that one person will just magically understand us and we’ll never feel lonely again, we’re setting ourselves up for a world of disappointment.

We’re sold the idea that being a relationship or marriage is a guarantee that we’ll never feel lonely or misunderstood again. But take a casual poll of the married people and ask them if that’s actually true. As a former married person, I can assure you it’s not. Relationships are work. They’re actually our biggest spiritual assignments: meaning we’ll get handed all the stuff about ourselves that we’d rather not look at.

The concept of Twin Flame downplays that whole idea. If your relationship should be just magically perfect, the brunt of the work falls on your partner (rather than on you). It also feeds into unhealthy ideas that you shouldn’t have to communicate your needs and boundaries and that the right partner should just magically anticipate all of that.

Entering into a romance with those ideas is extremely childish and difficult for the other partner involved! Again, it goes to show that this idea is limiting as it gives all your power away.

So what if instead of trying to find that one person who just magically get you without you doing any work you put your time and energy into figuring out how to communicate what you really want and need instead? As a bonus, learning this essential life skill will improve all of your relationships, not just your romantic ones.

I hope this post today didn’t rain too much on your parade! Here’s the big takeaway: you are worthy and powerful, all on your own. You get to create the life you want in every moment–including the love you really want. When it’s truly right, you definitely won’t have to second-guess or force it to happen.