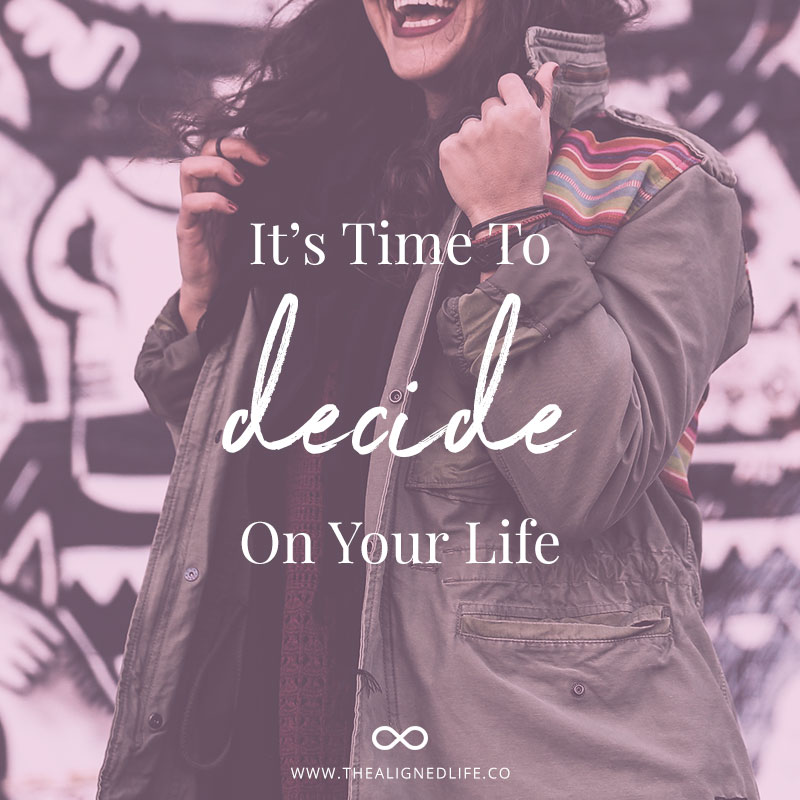 Want to create a new life?

It’s just one decision away.

It’s tempting to look at our lives and feel like the victim of circumstances. But in reality, it’s our decisions that have brought us here.

But what if you’re “basic minimum” was your normal level? What would happen if you could shift your whole life up a few notches on the awesomeness scale?

Those thresholds might not have been a conscious decision but make no mistakes: they are a choice. They are your invisible lines in the sand. Your friends, family, career and everything will fit inside of them so it’s important to make sure you’ve picked the right thresholds.

We think “this is just the way life is” and forget to even DREAM of anything bigger and better.

We fall asleep at the wheel and we forget entirely that we’reeverything.

As a human, you’re constantly growing and expanding. And sometimes we expand past what we used to want.

It’s totally okay if your goals change or move. You are a different person now than when you first set them. You don’t have to keep going after the same old things.

You can re-decide on the rules any time you like.

Before I made the decision to move to Berlin, I felt very trapped by my life.

(Even though I created every little bit of it!)

I was in a job that didn’t pay well and didn’t respect its employees.

I had a mortgage on a beautiful flat (the only problem being that the permanence of the mortgage began to feel like a chain around my neck).

I remember feeling so deeply torn about wanting to make a move and feeling like I wasn’t able to.

Until I realized, I could do anything I wanted.

The only thing holding me back was me!

I didn’t have to stay in the crap job. And I could sell the flat.

It seems so obvious now looking back but I definitely remember how trapped and unhappy I felt at the time.

But what I didn’t see back then was that all the reasons I had for not doing it were just EXCUSES.

I felt that because I had worked so hard to get where I was that I couldn’t just change things.

Which is so crazy!

Looking back now, I honestly cannot even imagine what I would have been had I NOT decided to move to Europe and become an entrepreneur.

Of course, this road hasn’t always been easy. But it was right for me. It was that little voice in my heart. And if I hadn’t listened, the voice would have only gotten louder and more demanding over time.

At the time, not everyone understood my motivations but I cannot live my life for other people. The disconnect between what I wanted and where I actually was was much too large to keep ignoring.

I walked around with a huge weight on my shoulders until I realized I could just DECIDE.

Your life is the result of your own decisions. So if you’re bored or unhappy in your life, you have the choice to pick something new.

Maybe what worked for you last year isn’t working for you now! And that’s okay. You’re growing and evolving and your dreams are too.

And once you realize that, you can start to make some new decisions about the things that aren’t serving you.

You get to change and grow and go for new goals and that’s your fucking job as a beautiful constantly growing human being.

You don’t have to be and do the same things for years on end if you’re not happy.

Life can be fun. It can be easy. And often you’re the only thing that’s talking out of going after your true happiness.

So don’t think you have to stay the same forever.

Don’t think you get to choose your life only ONCE and never again.

Don’t think that you have to make up for your past mistakes.

Don’t think that because you no longer want something that you have to feel shame about growing and changing.

Our choices are not set in stone. Most of us are constantly expanding past our old goals but we’re not in tune with what we do want.

We get addicted to talking. To thinking about all the possibilities for our future but not going after them. We put off making a decision because that would require (*gasp*) real work, energy and the possibility of failure.

Ask yourself what you really want in life.

Decide on actually achieving it.

Once it’s a decision, you become active about achieving it.

You act “as if”. You act with faith. You start working from divine inspiration.

Deep down in your heart, you know already know exactly who you want to be. It’s time to step up and become that person.

So throw yourself into the work of getting it done.

This isn’t a dress rehearsal! The longer you sit on the sidelines NOT deciding the longer it will take for you to feel truly empowered and happy.

The truth is it’s not the hard work or energy holding you back.

It’s your lack of commitment to yourself.

It’s your fear of change. (Because no matter how much we say we’re not okay with who we are and what our current life is like, picking something new requires us to get out of the COMFORT ZONE we’ve created.)

But most people’s comfort zones are pretty shitty.

Yeah, it’s comfortable. But do you want to be broke/single/underemployed forever?

Or do you have enough guts to DECIDE on what you really want to be.

I invite you today (right now) to make a decision on where your life is going next.

Pick a goal. Write it down. And start pursuing it with your whole heart.

Tell people about the new business that you’ve launched (that maybe you’ve never even signed a client up for).

Because the real trick is that you can opt-in to that reality RIGHT NOW.

And the only person with the magic wand is you.

So again I dare you. Dream the dream. Make the decision. And BECOME that person who you were really meant to be.

I hope this post inspires you to take some positive action in your own life. Transformation isn’t always easy but it’s so necessary to create the life we really want.

Thank you so much for reading and have a beautiful week!

PS Looking for more? You might also want to check out this post about how to use the Law of Attraction in 6 steps or this one about why you shouldn’t try to manifest happiness.