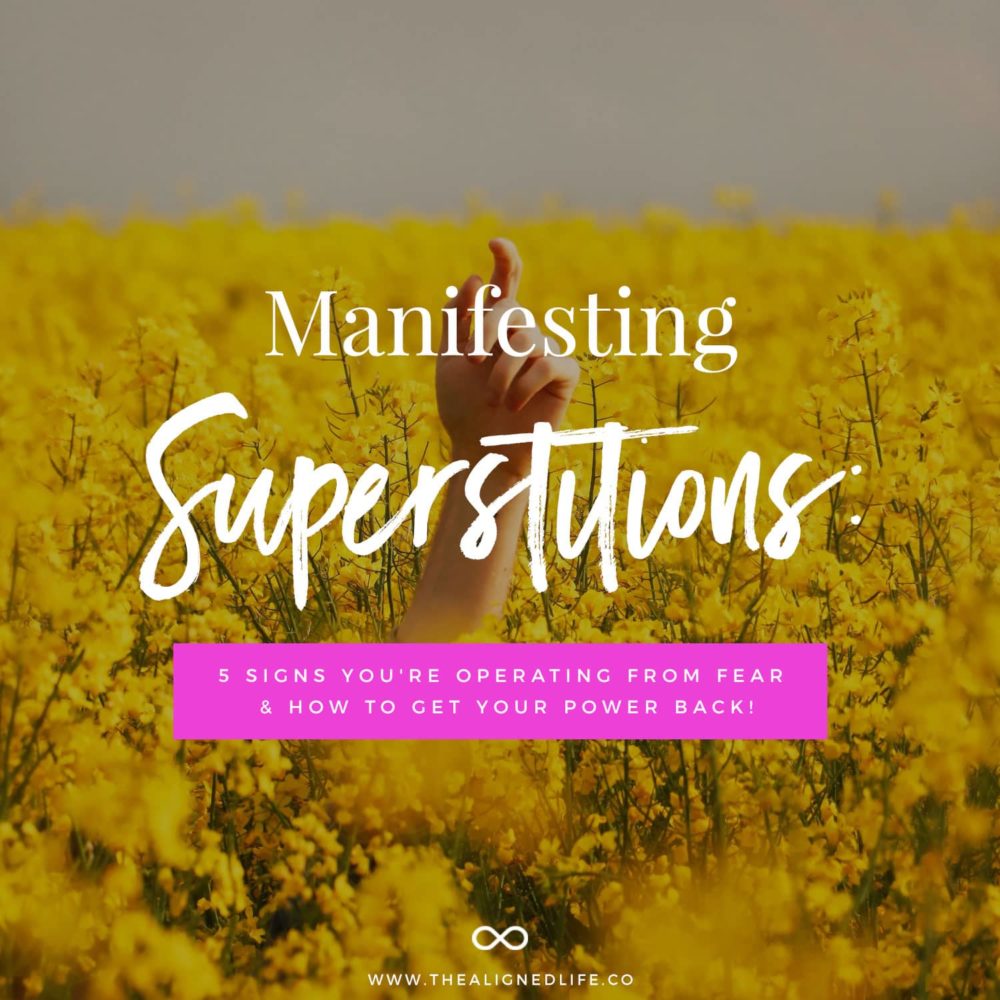 When it comes to the Law of Attraction, do you know what’s truly important versus what’s simply manifesting superstition?

Let’s face it: there’s a lot of information out there–and unfortunately not all of it’s good.

If you’re starting to worry about the details instead of sinking into your own power, then there’s a good chance you’ve fallen prey to manifesting superstition.

To be fair, none of these superstitions are coming from a bad place! Most of them have their roots in things that are real.

However, there’s always a problem when we turn on autopilot. Doing things out of habit is the ultimate in unconscious living–the total opposite of the Conscious Creation we’re striving for.

No matter what you’re manifesting, your consciousness is key. So superstitious thoughts really just show that we’ve fallen asleep at the wheel (again!) and signal that it’s time to come back into our true power.

Even when it comes to manifesting we can’t control how or when things will show up for us. So instead of wasting our energy and attempting to micro-manage the Universe, it’s much more useful to focus back on our side of the manifesting equation: monitoring our own thoughts and energy.

If you’re worried that you’ve fallen prey to manifesting superstitions, here’s a guide about five of the most common ones and plenty of advice about how to get back on track!

Manifesting Superstitions: 5 Signs You’re Operating From Fear & How To Get Your Power Back!

I completely understand where this one comes from: if emotion is vibration and like attracts like, then of course we’d want to stay positive to attract in our desires! But while this idea is rooted in truth, most of the New Thought leaders that push this forth leave little room for nuance.

In reality, humans are meant to experience a range of emotions, both high and low. It’s called contrast: the lows make the highs that much sweeter. Yes, it’s empowering to learn how to control your thoughts (and therefore your life!). But the point is not to avoid negative emotion entirely. In fact, our negative emotions are often indicators of something we need to look into. Simply ignoring them or pushing them away does not allow you to unearth the message they are here to tell you.

Besides, if you had to have 100% “perfect” thoughts in order to manifest no one would ever do it! So don’t get it twisted. Yes, it’s important to take control of your mind but don’t beat yourself up when things get down. You’re allowed–and indeed expected–to be fully, beautifully human.

Worrying That You’re Doing It “Right”

I believe this idea also stems from the “only positive thinking” line of reasoning. It can be too easy to go from taking responsibility for our thoughts into categorizing our thoughts through morality: good or bad.

So please hear this: thinking “bad” thoughts won’t result in you getting punished with bad things! Plus we will all have some “bad” things that happen to us, no matter how happy and positive we are. It’s not a moral issue that you can bypass. It’s just part of being human.

Signs from the Universe are an amazing way to play with energy and feel aligned with universal energy. But all too often this can fall into short-sighted superstition. If you’re constantly asking for signs because you didn’t get the one you wanted, then it’s time to seriously pull back.

Here’s what this usually looks like: you want the guy you like to text you. So then you ask the Universe for a sign that he’s going to. But you don’t get it. So you ask again but this time you ask for a sign that you kinda-already-know you’re going to see anyway in order to see exactly what you want.

Uh-uh girl. For one thing, your dude might still text you whether or not you got the sign you wanted. But trying to short the system by asking for an “easy” sign really just means that you don’t believe in your own manifesting powers. Constantly needing external encouragement about your desires is the manifesting equivalent of needing constant validation.

Or in other words, if you believed in your own powers and desires you wouldn’t “need” the signs at all! So if you’re becoming overly-reliant on them, then it’s time to double down on your own self-belief instead.

Fact: I have definitely posted about popular manifesting rituals here on The Aligned Life! (For example, vision boards, 5×55 method, 2-Cup Method etc.) But I always offer a disclaimer when I do. I definitely fear you guys getting too obsessed over the ritual itself instead of understanding the reason behind the ritual.

Focusing your energy and attention on a ritual can be a powerful way to make your intentions manifest. However, it’s crucial to remember that those rituals exist for another reason. The vision board works but constantly reminding your subconscious of where you want to go while the 5×55 method uses repetition to rewire your brain to align with your desire. The magic doesn’t come from performing a ritual perfectly! It comes from you consciously and subconsciously aligning yourself with your desires.

Ignoring Your Own Power

Falling back on superstition is really just a huge indication that you still value the power of the outside world over your own.

But your own subconscious mind is the doorway to everything you really want in life! You can spend a lot of time doing rituals and asking for signs but unless you’re doing the real work of digging into your old programming, limiting beliefs and low self-worth you’re not going to make much progress. You don’t need to worry about the Universe doing its part! But most people miss their own part in the manifesting equation by continuing to focus on factors outside of themselves.

So know this: there is always something you can do to be more authentic and aligned with your goals–and that has nothing to do with perfectionism or waiting for permission. The more action you can take, the faster you’re going to make that shiny happy dream of yours a reality!

So tell me: where have you been relying on superstition more than on your own power? What manifesting tools are you going to leave behind in order to start focussing back on yourself?

Thankfully, manifesting really isn’t about sitting around and waiting for things to happen! It’s about real inner work and the more you can focus on that, the better off you’ll be!

PS Looking for more? You might also want to check out this post about reprogram your subconscious mind or this one about how to get everything you want in life.