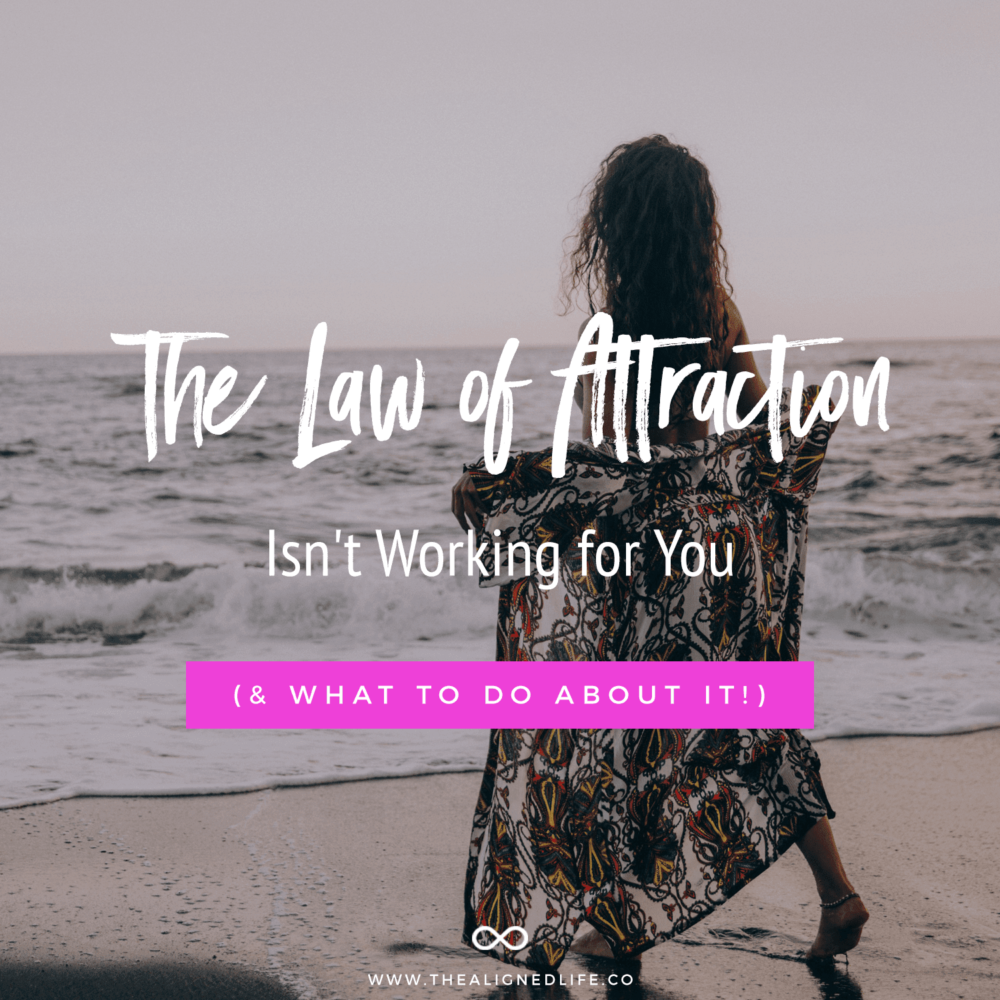 Feeling like you can’t manifest? Or even worse! Like you’re getting the opposite of what you really want?

As much as I love manifesting, I still get messages from people who feel like it’s just not something they can do. Which is a real shame!

Let me start off by reassuring you: it’s not you. Manifesting really is a law of nature; it’s something we’re all doing at all times! So you don’t have to worry about whether manifesting is something that you can or can’t do. You’re already doing it! The only thing I’m teaching you on this site is the ability to do it consciously.

But I get it. Sometimes manifesting doesn’t feel easy or breezy at all!

Sometimes it feels like you’re pushing things away or even like the you’re getting the total opposite of what you really want.

So in those situations, what gives?

Troubleshooting your manifesting techniques can be an admittedly tricky business! But I don’t want you to give up on this opportunity to become a Conscious Creator.

So that’s why I’m here today to give you some basic advice on how to pinpoint why they Law of Attraction isn’t working for you–and what to do about it!

This is by far the number one biggest mistake I see novice (and even experienced) manifestors make! But being vague or wishy-washy with your goals is a sign that you’re not really even in the manifesting game.

Here’s a good rule of thumb: if you don’t know how to tell if you’ve hit your manifesting goal, then neither will the Universe! Specificity is key to getting what you want. Although it freaks some people out! Some people worry that by being specific you’re also cutting yourself off from other options. And others just don’t really want to bother getting clear about their goals (because clarity in itself is also hard work).

But don’t be fooled! Without a concrete direction to set out in, you haven’t begun your journey! So dial it down and dare to get specific. After all, the worst thing that could happen from doing this is actually getting what you want!

(Note: according to Human Design there are two types of manifestors: specific and non-specific. You specific manifestors have the green light to go ahead and get super detailed about what you want. But you non-specific manifestors still have work to do too! For example, if you’re trying to manifest a new city to live in but you’re not sure put the cosmic order out there for your two or three most intriguing options. In other words, it’s still up to you to do the work of deciding, even if you’re giving the Universe a little more to work with than the specific manifestors.)

Your Having-ness Levels Are Low

Be real now: can you really imagine your life with your goal in it? Or are you actually suffering from low self-worth?

All too often we’re still hinging our inner self-worth on our what our outer world looks like. We want the money or the car or the man because we think those things will make us happy! But the reason those things aren’t in our current reality is because subconsciously we don’t think we’re worthy of them.

Our havingness level is just our natural set-point for where we live our life. It’s like an internal thermostat: we don’t like to go below or above a certain level. In other words, if your self-worth is really low you’re actually not 100% onboard with actually getting what you want. That means that no matter how much you want it your brain isn’t actually comfortable with you getting it–and that translates into the dreaded self-sabotage.

To combat this, it’s time to raise those levels yourself! How can you start demanding and accepting more into your life–on every level? Low self-worth doesn’t exist in just one category. It will show up in every area of your life. So improving the things you don’t think have anything to do with the your manifesting goal really can help you to improve your overall worth and manifest faster.

You’re Fixated On The How

One of the cardinal rules of manifesting is that you can ask for something but you can’t control how it shows up for you! However, we often do this without even noticing.

For example, say you’re trying to manifest money. Right now, you’re working a 9-5 job and you’re up for a promotion. Your brain might jump to the conclusion that the only way you can manifest more money is through the promotion. Then you don’t get the promotion and you’re left wondering…WTF?

The truth is it wasn’t the promotion you were trying to manifest! It was the money–and there are actually many different ways money can show up for you in this world. It’s really just your job to open those money portals to make sure it can find you.

For example, maybe you start a side-hustle, self-publish that booked you finished last year, start helping people with design work (because they’re always asking you). Those are all just new portals for money to show up for you. Believing that getting a raise is the only way is closing you off to every other avenue.

So get clear about your desire and notice where you might be blocking yourself. The Universe is mad creative so don’t fall for the idea that you have to plan every last thing!

You’re Living In Fear Of It Not Working

It’s one thing to want something! But if you start to make your desire basically a life-or-death level of importance, then you’re also accidentally pushing it away from you.

All too often we turn towards our desires from a place of low self-worth. We don’t really feel good about ourselves but we think that if we can get the job/car/man etc. then we will. However, we always get what we put out there energetically speaking! So if you’re afraid of things not working out for you (because that will mean you still can’t feel good about yourself) then you’re really living in a huge Catch-22.

The answer of course is to become truly deeply okay with who you are right now! Real self-love doesn’t hinge on anything outside of you. Believing that it does only makes you feel desperate about achieving them.

The final reason the Law of Attraction isn’t working for you is because you simply haven’t decided. Decision might not have been mentioned in The Secret but it truly is key to getting what you want.

After all, this is all just energy work right? So what does your energy say if you’re still making your dreams optional?

Once you decide on something, you leave so much drama and stress behind. Making your success inevitable in your own mind has the pleasant side-effect of making it inevitable in reality!

So how can you start making your goal non-optional? How would you speak/think/talk about your goal? What actions would you be taking? Answer those questions and you’ll be well on your way to making your manifestation intention a reality!

So tell me: where are you tripping yourself up when it comes to manifesting? Which tactic are you going to apply to get back on track?

Just remember: you always have control over your own energy–and manifesting is really all about energy! So don’t give up now. Truly stand up for what you want and keep doing the work you need to do to get there.

PS Looking for more? You might also want to check out this post about how to get everything you want or this one about guide to total alignment. And now for a quick message from your Higher Self: