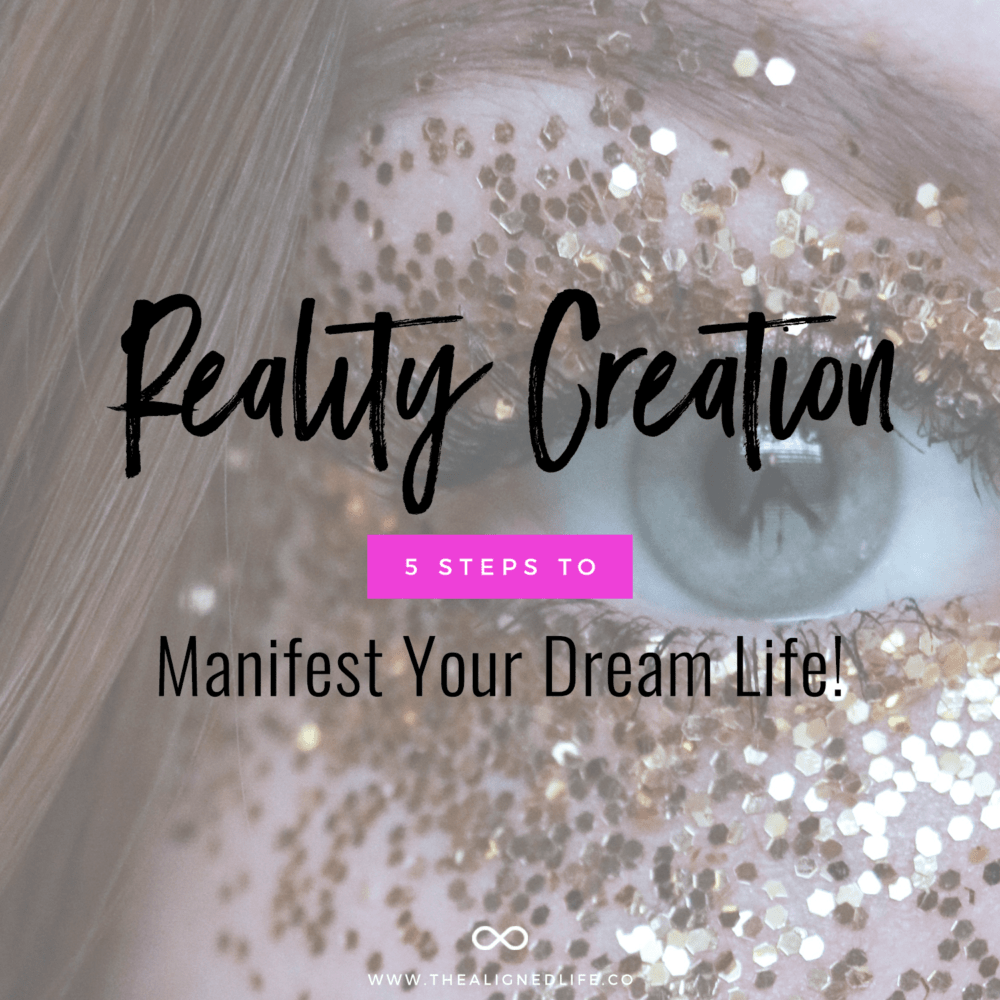 Whether you realize it or not, you’re already creating your reality.

But you probably don’t know this! Otherwise, would you still be settling for a life of unpaid bills and unsatisfying dates?

The truth is we all have the power to call in exactly what we want–yet most of us have no clue about just how powerful we really are.

Instead, we suffer from crippling self-doubt, limiting beliefs and negative programming.

If you get told over and over again, that you’re not enough, sooner or later you’re going to believe it.

So it’s my job here today to help you unlearn all of that negativity and instead see the real truth of reality:

You are creating your life, always.

If you’re not happy right now, you get to choose again.

I know that you’re reading this post for a reason today! It’s time for you to claim all of this power for yourself. So let’s get into it, with these five simple tips.

Accept That You Are A Conscious Creator

I’ve been here for years now reminding you all about just how powerful you really are.

You were born to be a Conscious Creator: someone who has the potential to manifest the life of their desires.

It’s just that right now you have a whole lifetime of programmed negative beliefs telling you otherwise. (“The Law of Attraction isn’t real.” “People like you just can’t be rich.” etc.)

I understand that the most difficult thing in the world is to believe in your own potential. But if you’re not ready to hear it from me, maybe you’d believe the CIA?

This declassified document outlines how creative visualization during certain altered states of consciousness (like meditation) can actually create our desired outcomes in reality.

The document basically states that the CIA accepts the holographic universe theory. If you break down a hologram, each tiny little piece contains a representation of the whole. Or, as they say in the world of magick: As above, so below. (But more on that in the next steps.)

For now, it’s just important to understand that you have creation power. You don’t have to work at it or become worthy of it or prove yourself to the Universe. This is your essential nature and it’s time that you embraced it.

Decide On What You Want

Simple? Yes. But the basic step of deciding on what you want is absolutely essential to reality creation. Because, like I always say, if you don’t know what you want, how will the Universe?

Most people either pick a wishy-washy goal (like “more money”). Or they opt out of picking anything because they’re already either judging what they want or they’re already living in fear of not attaining it. Because of course deciding on a goal also opens the door to so-called failure–and our lizard brain really doesn’t want that to happen.

But you are stronger than your lizard brain! And it’s up to you to start trusting in your own potential. If you’re truly invested in Reality Creation and in exploring your potential as a Conscious Creator, then it’s time to pick some goals to run after.

So tell me: what does your crazy little heart desire? What do you want in life? 10 years from now? 1 year from now? Next week? Manifestation is the process of creation but it needs a map to follow. Now’s your time to create the map!

As long as you keep thinking about your with being something you’re going after, you’re keeping it well outside of your current identity.

For example: you decide you want to manifest an extra $1000 per month. You get really excited about that number and start imagining all the fun things you’re going to do with it.

For quantum manifestation to kick in (aka for you to create the results you want quickly and easily) then you have to bridge the gap between here and there.

In other words, you have to become the person who already has the extra $1000 a month–not just the person who’s thinking about it.

This is where most manifestors get it wrong. Because thinking about the future is really fun! But make no mistake–it’s not going to get you what you want.

Working towards what you want will keep you forever trapped in lack and not being there yet. But when you flip it to working from what you already have, that’s when the manifestation paradigm shifts and you can finally call it in.

In order to truly create your reality, you have to address your subconscious mind. Because trying to manifest purely through you conscious mind won’t work.

You just can’t get there from here. Meaning: you 100% cannot manifest a new reality while hauling around your old pile of limiting beliefs and negative programming. Look at it this way: your old ways of thinking created your reality now. So to elevate your life to new heights, you need some new beliefs to match.

Reality creation begins on the inside of you. But that means that every one of your beliefs and internal voices that is telling you “no” is an opportunity to reprogram.

There’s two parts to this. Part one: notice how your Jerk Brain is tripping you up and getting in your way (ie. excuses, procrastinating, Inner Mean Girl/Guy-ing). Then part two: decide on what you actually need to believe in order to create what you want.

Take Action Daily To Align With Your Desires

One of the biggest misconceptions I see with manifestors is those people who think that you can just sit around and wait for the Universe to bring you what you want.

I mean, yes, of course the Universe is capable of sliding what you want piled on a golden platter straight to your door. But that only works if we have truly aligned with what we want! And most of the time, our inaction is really a symptom of our own fear and self-doubt. (Aka not a big fat sign that you are not in alignment with what you want.)

Again, this is about deep transformation starting from the inside. Making your manifestations just something that you think about once in a while will not get you where you want to go. But taking deep transformational action daily? Now we’re talking!

My favorite way of taking inspired action daily is through my Manifestation Journaling practice. Now I’ve tried lots of different ways to manifest, but journaling is the one that combines physical practice with emotional and spiritual alignment. It has radically accelerated my ability to manifest–and it can do the same for you!

The biggest favor you can ever do for yourself is to stop just accepting your life As-Is and start taking your own power back. You might not manifest a million dollars overnight but with time and practice, you will dramatically change what is available to you.

I can’t wait to see what you do with this!

PS Looking for more? You might also want to check out this post about signs that you have manifestation blocks or this one about how to manifest $1000 in a week.