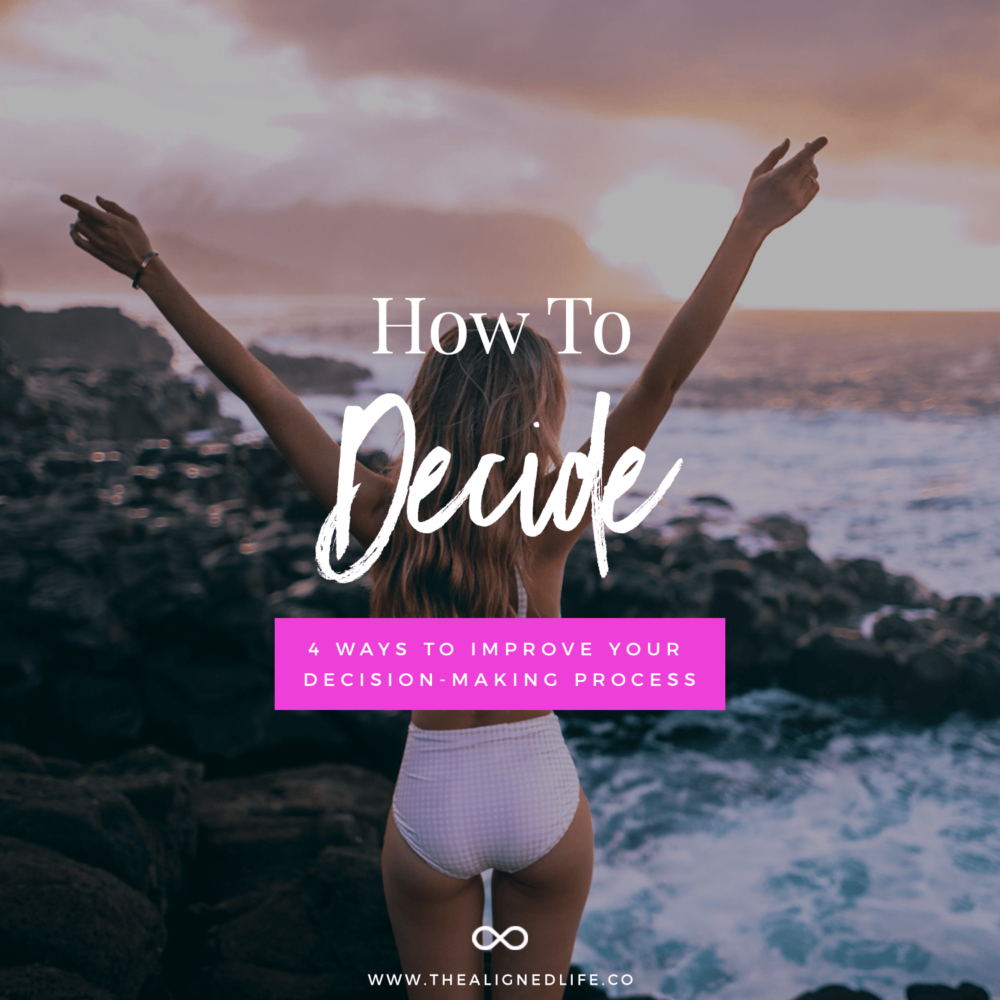 Whether you know it or not, your ability to make decisions is one of the most life-altering skills in your possession!

We all have to make decisions in our life, whether big or small. But the way you think about those decisions has a very big impact on your life!

So let me ask you this: were you ever taught how to make decisions? Probably not–or at least very minimally.

Instead, we’re taught some pretty crazy things about deciding.

Maybe if you’re a people-pleaser you were taught that having an opinion was a nuisance. Just be agreeable instead! And just do what everyone else wants to do.

Or perhaps you were taught that you could figure out the right answer–if only you thought long and hard enough.

Perhaps not making decisions (or not making them fast enough!) is what’s really tripping you up in life.

Decision making is something of a super-power. Yet few people place importance on this skill!

We’re just expected to make a decision and magically get it right–an approach that lets us fall into some common mind-traps and fears.

If you’ve ever struggled with making a decision (and haven’t we all?), then this post’s for you! Stop worrying about the “right” answer and dive in here:

How To Decide: 4 Ways To Improve Your Decision-Making Process

Claiming What You Really Want

Too many of us haven’t gotten what we want because we just haven’t claimed it. We didn’t bother to get specific with the numbers or actions. And without knowing the goal, it’s impossible to ask!

But truthfully, deep down we really didn’t want to –gasp!–put ourselves out there like that–because that would also invite the dreaded possibility of failure.

But how much fun is not trying at all? How much fun is it to tiptoe around the pool, looking at how cool and inviting it is and never once jumping in?

You cannot get what you want in life if you can’t even admit to yourself what that is! We only know we’ve hit our goals when we’ve bothered to set them. That goes for manifesting as well: how can the Universe give you what you want if you haven’t even asked?

But I also get it if this makes you uncomfortable. People-pleasing can make you put everyone else’s opinions so much higher than your own that you forget you even have any. Also being a someone you may have been taught to put everyone else’s needs first. Those things might not seem to have any bearing over anything else in your life but the ramifications are actually huge. Because if there isn’t any point in voicing your opinions out loud, you might stop admitting them to even yourself.

Not asking for things can also be interpreted as a non-zest for life. You’re definitely not living life in a conscious way! (And my real aim is to make every single one of you a Conscious Creator.) So it’s time to turn all of that around and actually acknowledge (and ask for!) what you really want.

Worrying About The “Right” or “Wrong” Answer

Of course decision-making becomes difficult (or impossible!) if you believe there’s only one right answer (and that if you don’t figure it out you’ll f*ck your life up permanently). Who can handle the pressure?

The real problem here though is the simple belief in both “right” and “wrong” answers. For example, this could be the fear of picking the wrong school, guy or job. When you believe there’s a wrong answer, then you’ll be afraid of the consequences. Instead of life becoming a large learning experiment, you’ll be afraid of living with the ramifications of your decision for the Rest. Of. Your. Life!

(Eeeep! How debilitating! Who wants to accidentally damn themselves to a life that’s less than they want and deserve?)

However, it’s also not at all possible! Not even remotely. Again, there are very few decisions in this life that you can’t recover from. Sure, maybe you picked a school that’s not a 100% fit–but the truth is, no school would be! You might get occasionally caught up in a fantasy that if you’d gone to your other choice your grades would be better, your friends would be cooler and your job prospects would be more awesome–but that’s just your brain playing tricks on you! There’s really no proof of any of that stuff.

In reality, where you are now is just as good as what your other choice would have been. Plus if there’s anything that’s really missing, there’s always a way to still go out there and achieve it. Nothing is forever!

We’re forever compromising ourselves in one way or another! So don’t start believing that if you’d compromised in a different way things would be better. They’d just be different–and once you understand this, you’ll remove any lingering fears and doubts and enable yourself to calmly choose.

Worrying For Too Long

As kids, we were taught to be thoughtful with our decisions–but that caution can easily become a problem in itself! Again, this comes back to societal programming. We’ve been taught to believe there’s one right answer, above all else, and that if we just think about things for long enough we should be able to figure out what that is.

But what if that’s totally wrong?

I believe this is a natural hold over from our school days and searching for the right answer on a test. But the real world doesn’t work the same way! There’s rarely one answer that hits all the right notes; instead, we usually get to pick from a bunch of answers that each have their own pro’s and con’s (making none “better” than the rest).

The only thing that you can guarantee will happen when you ponder for too long is losing more of your precious time. After a certain point, a non-decision becomes the decision. If you don’t take matters into your own hands, the world will eventually decide for you.

But on the other hand, swift action is usually rewarded! The Universe loves action. So when you decide and commit on something fast, you’re typically rewarded very well for doing so.

Similar to taking too much time to make a decision, is the need to do a lot of research. On the surface this seems to make sense: if I find the right information then surely I’ll know what the “right” answer is! However, this tactic rarely works the way we want it too. Instead of more information making our choice easier, we just tend to get more bogged down and confused by all those extra factors.

Of course, doing some research might come in handy for certain decisions! But don’t fool yourself into staying research mode for too long. Again, this can be just another way to delay (and ultimately waste your own time). In most cases, the information you really need has already presented itself! So don’t look for more information. Concentrate on making the best decision you can with what you already have.

So tell me: how do you find decision-making hard? What steps are you going to take to improve your process?

I sincerely hope this post has taken some of the unnecessary stress out of the decision-making process! You really don’t have to stress yourself out about any one thing so much–even though your brain very much believes otherwise. It’s all just part of the process and when you embrace that concept (instead of striving to be “right”) then you’ll find so much more ease at every step of the journey!

PS Looking for more? You might also want to check out this post about how to release fear, shame and guilt or this one about 7 signs that love is on its way.