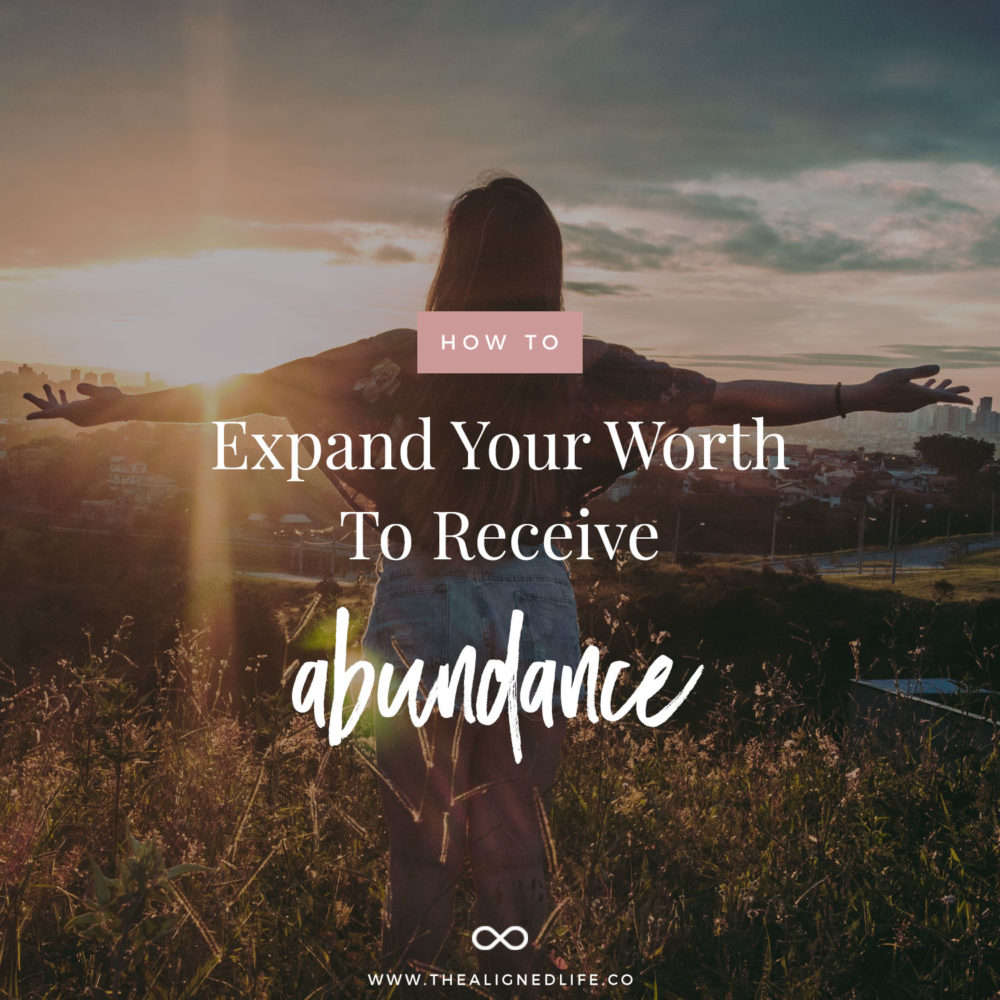 Your sense of worth is EVERYTHING when it comes to manifesting! Because your life is created from your own standards.

Your sense of worthiness isn’t about achieving more or pushing yourself farther. It’s about a sense of inner acceptance.

The truth is that society has literally trained you to feel unworthy! Just turn on the TV and watch a few commercials to see this in action! You are clearly not worthy now but you might be if only you buy this mascara, laundry detergent or car.

We’ve been conditioned to think worthiness is always just around the corner. But like the pot of gold at the end of the rainbow, it will always remain just out of reach unless you decide to step up and claim your worthiness back for yourself.

Healing your worthiness issues is the most important step towards creating a new wealth consciousness! According to the Law of Attraction, if you keep expecting money to somehow elude you it will. So it’s time for you to admit that you have some money worthiness issues in order to heal them.

But the good news is that you can also RAISE those standards yourself! You don’t have to settle for what your parents told you was good enough or what your ex-boyfriend thought you deserved. You’re a free agent in this life and only what you think matters!

Shedding those old opinions and stories is the only way to come back to your truth: that you are a deeply worthy and deserving being…

If you’re ready to shift from scarcity into abundance, then it’s time to make sure your worthiness-levels match with what you want in life! And here are four different ways to do exactly that.

Expand Your Worth To Receive Abundance

Judgment is one of the biggest blocks on the road to abundance! When we place the people we see in the world on a scale, we’re automatically getting on that scale along with them! Judging someone for having less only works when you’re looking in one direction. When you look the other way, suddenly it doesn’t feel so great anymore.

Despite what it feels like deciding on who does or doesn’t deserve their money is not our job! You can’t ever judge someone else without also judging yourself on some level! So let’s drop the judgment habit.

When you stop thinking in black and white terms you leave room for everyone to become equal. And when people are equal there’s no more resentment over who earns more or less money than you.

All the intentions in the world cannot make up for a low sense of worth. It’s one thing to desire something but it’s a whole ‘nother ball of wax to actually allow that something into our life!

We’re actually pretty good at deflecting outside help because it somehow triggers us or it doesn’t look quite the way we expect it to. Saying no to these gifts from the Universe is common when you’re feeling unworthy.

So it’s time to say YES to whatever help you’re receiving–whether that’s from a mysterious source or from your boyfriend. Keep saying yes and keep allowing help to arrive and you’ll only attract more and more of the same.

You’ve been told over and over again that people with money are worth more than you. But of course that’s not actually true! Buying into this belief is an easy way to keep wealth at arm’s length! Not only do you believe that something must be wrong with you for not having it that but you also start to put abundance and money on a pedestal. The higher you make that pedestal in your mind, the more difficult it will be for you to earn the money you so desire!

It’s time for you to throw that old paradigm out the window! Stop using wealth as an indicator of success. Instead, look at how many people you’re helping or how you’re changing the world through what you do. Money isn’t the true goal here but impact certainly is! It’s time to get clear about what kind of impact you’re making.

Restructure Your Other Beliefs

You can deny them all you want but we’ve all got limiting beliefs that relate to our money consciousness! It’s true: not every belief that you hold is doing you a favor! Some of those beliefs are harmful–and they likely weren’t even truly yours to begin with. You learned them through the world you lived in as a child. So even though they defy logical sense and your current conscious belief structure, they’re still there, making you behave in ways that aren’t at all in alignment with your intentions.

Every belief you have is really just a sentence! So it’s time to be conscious about which sentences you’re choosing. Do you want money to be difficult to earn? Do you want rich people to be greedy? Do you really want to think money is the root of all evil? Once you draw attention to the pre-existing ideas you have about money it becomes much easier to swap them out for something that you actually want to believe.

Mindset is everything in life, and that’s no different when it comes to attracting more money! So if you’re money game isn’t quite where you want it to be, you likely have some worthiness issues lurking beneath the surface. But learning to love on yourself is 100% free–so it’s well worth diving into the work I’ve outlined here.

Good luck with it! Thanks for reading & as always, I’d love to hear your experiences and thoughts.