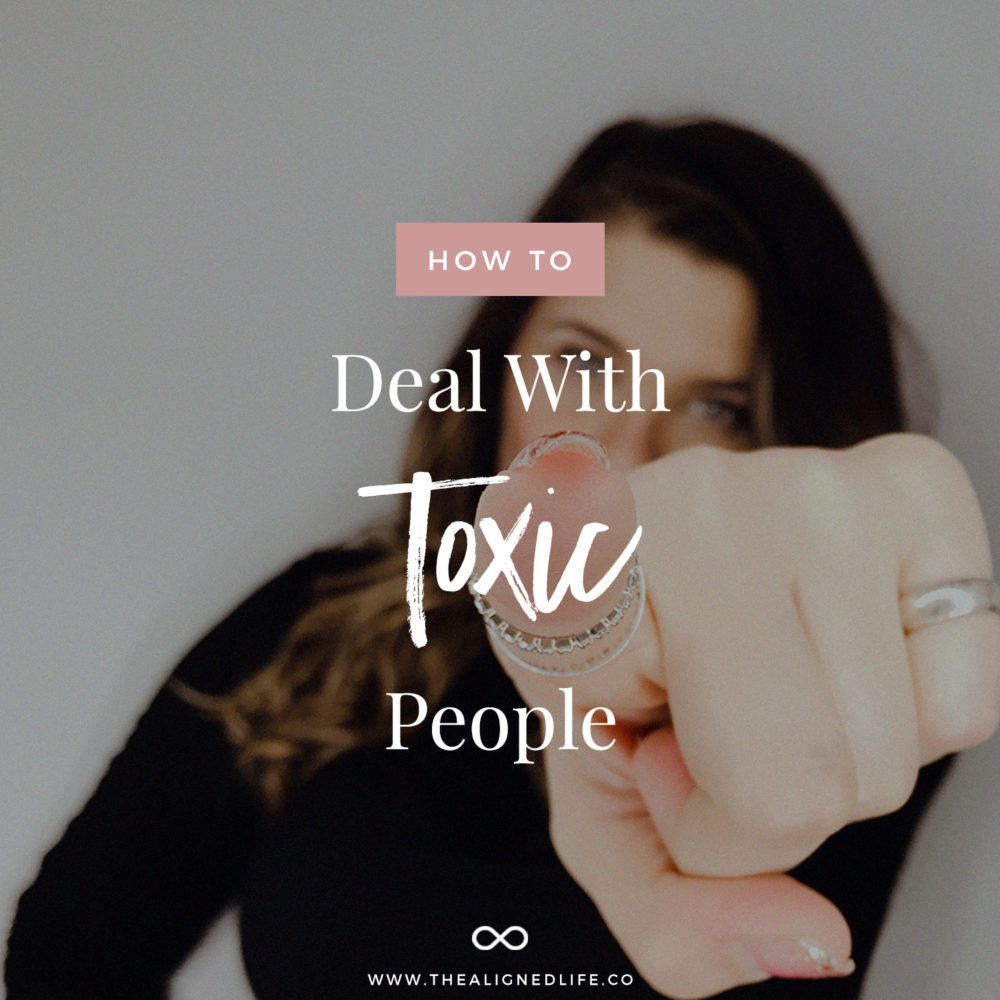 We can all think of some examples: Your overbearing mom. A frenemy. Maybe even your boss or boyfriend or husband.

Maybe they nag. Or call you names. Or they lie, manipulate or are disrespectful.

Not everyone in this world is going to treat you the way you deserve to be treated!

But how are you supposed to deal with these situations in an empowered way?

Newsflash: there’s no such thing as a toxic person!

Think about it: no one is truly so terrible that they’re literally going to poison you.

But while toxic people don’t exist, toxic interactions do!

Relationships are about the interaction of two people. Which means many times both people are bringing something into the toxic interaction.

Sometimes other people bring out the worst in us! Sometimes the misunderstandings simply pile up on top of each other and sometimes we just haven’t made our own boundaries clear.

But no matter where the problem lies, your energy is precious! And it can be affected by the people around you! (We’re all energetic sponges after all.)

But living in fear of toxic people is not the answer!

Again, since this is a relationship problem you have the power to change things. You’re always in control of your own actions!

So there’s no need to give your power away to these so-called toxic people.

But just in case you need a little extra help managing the situation, this guide should help you deal with any toxic relationships in your life:

How To Deal With Toxic People

How To Deal With Toxic People Tip #1:

No one can make you feel something without your permission. So if someone has gotten under your skin, it’s only because you’ve allowed them to. The gatekeeper of your mind and emotions is you. No one is so powerful that you have to live in fear of how they’re going to make you feel! There’s always a way to reframe the situation to give you your power back and make you feel better.

How To Deal With Toxic People Tip #2:

Look For The Lesson

Being triggered by someone might be about that person. But most often it’s really about us! How else could one comment or situation make you feel bad about yourself? What story are you telling to make yourself feel that way?

No one is perfect and we will always have work to do on ourselves! And a large part of that our self-work will be triggered by our encounters with other people. So don’t be too quick to write someone off as toxic! That’s just a good way to bury your head in the sand and never truly examine your own issues.

How To Deal With Toxic People Tip #3:

Part of the problem might be that you’re already giving your power away to the toxic person!If you believe that someone keeps coming into your life and preventing you from doing the things you really want to do, then guess what? They will! But it’s NOT about the magical power of that toxic person. It’s about YOUR BELIEF about what that person is doing to your life.

Repeat after me: NO ONE has control over your life except you. You can deal with toxic people and still maintain control of your life–and your own vibration! So get curious about what you’re making this toxic interaction mean. If needlessly you’re blowing it out of proportion, it’s time to come on back to the real world and to step back into your true power.

How To Deal With Toxic People Tip #4:

Much of human behavior is just repeating patterns. We put on a mask. We get up in the morning and play the same character that we’ve always played. And so does everyone else! But every once in a while the character that someone else is playing isn’t so nice.

We all have bad moods, bad days and sometimes even psychiatric episodes that result in poor behavior on occasion. But for others, that poor behavior is just the way they are!

A genuinely mean person is going to be mean to everyone–just like a mean dog! Your interactions might be toxic but this experience doesn’t actually mean anything about you. It’s 100% them. And even though it sucks when someone is needlessly mean to you, you also need to realize that this would be happening to anyone in your position! It’s not your fault and you couldn’t have prevented it. So don’t take it personally and just move on.

How To Deal With Toxic People Tip #5:

You Can’t Control Anyone

It’s crucial to know that dealing with a toxic person is never about changing the other person. You cannot make anyone behave the way you want them to! The only thing you can ever do is maintain control over your own thoughts, emotions, and behavior.

Many times when people complain about toxic people what they really want to happen is the other person to say “Holy shit! I can’t believe the way I’ve made you feel. I’m so sorry.” And then to start acting differently.

Unfortunately most of the time, that’s just a nice fantasy! You can ask for the apology. You can ask someone to not cross your boundaries again. You make it clear exactly how you want to be treated. But you can’t actually make them do it! It would be nice if everyone said and did only things we approved of. But sometimes you just have to accept what’s happened and move on.

How To Deal With Toxic People Tip #6:

Most toxic interactions are based on the actions of two people. The “toxic person” is trying to force you to play a certain part in their play. So what happens if you stop playing the game?

For example, narcissists are adept at getting you to react to them! These people feed off of attention and drama. So when you refuse to give them the energy they crave, they’ll eventually learn to go get their “fix” elsewhere.

This can happen in regular relationships too! I know one particular Debbie Downer type, who always forces me into the part of The Cheerleader. No matter what’s happening in their life, there is simply no way for me to help them or cheer them up. No matter how often I say “Hey it’s not so bad!” or “Have you thought about doing X?” they refuse to budge from their misery.

So now instead of playing the The Cheerleader part, I just sort of nod and agree. It takes all the drama of the “argument” away and the conversation naturally moves on to something else. As it turns out, without the fuel, there is no fire.

How To Deal With Toxic People Tip #7:

This is the LAST and final step of the journey! But if all else fails, then yes, it might be time to limit your interactions with a toxic person in your life.

If someone continues to insult you, laugh at your dreams, talk behind your back or violate your boundaries, then yes it’s time to limit your interactions–or maybe even cut them out entirely.

If it’s the boyfriend who keeps cheating on you, it’s time to dump him. If it’s the friend who demands your support but doesn’t offer you any, it’s time to spend your time with other people. If it’s your mother who just loves to criticize, it’s time to limit your phone calls to once a month (or year!). You get to decide the rules in your life and if you’re being picked on or taken advantage of, you always have the right to walk away from the situation–no matter who the toxic person might be.

If you know deep down in your heart that this is necessary, then I implore you to actually go through with it. Don’t just continue to complain. Don’t think “But what will I do without X in my life?” Don’t delude yourself that this behavioral pattern will change without any action on your part. It won’t.

A Note About Namecalling

Pleeeeease note that nowhere in this post do I condone yelling “You’re so toxic!” and leaving the room, Real Housewives-style. Let’s face it: calling someone toxic to their face is just a New Age-y way of calling someone an asshole (while feeling very self-congratulatory about it)! But honestly, it feels pretty icky to call someone names, even if we use a word like toxic instead of the old expected insults. Calling someone names doesn’t bring anything useful to the situation and will actually just make everything worse. So don’t be tempted to go there!

Toxic situations are just a fact of life! So don’t think you’re doing something wrong when you encounter one. Just remember that you’re always in control your own reactions and you’ll be able to work through them in a positive and empowered way.

I hope this post helps you navigate the oh-so-tricky world of interpersonal relationships! It’s never as black and white as the words “toxic person” would have you believe. But if you move through your life with control and faith in yourself, you’ll find that you’ll have fewer and fewer of these interactions over time. ????

Good luck & have a wonderful week!

PS Looking for more? You might also want to check out this post about how to liberate your desire or this one about how to get out of your own way.