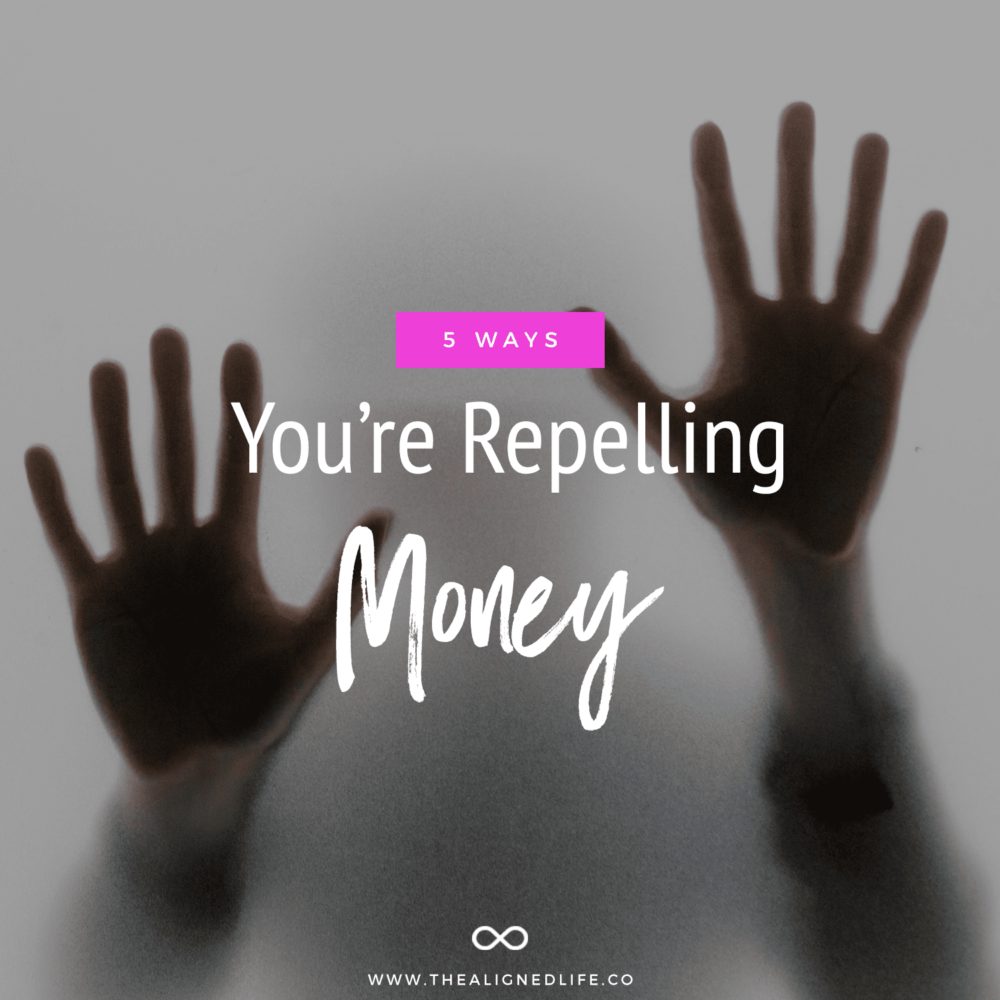 Does this sound familiar: you’re trying to manifest money for yourself. You set the intention and you start to do the inner work.

But it just seems like no matter what you do, the money doesn’t come in. Instead of attracting, you mostly seem to be repelling money.

It’s not that manifesting doesn’t work. (In fact, you’ve probably had some great experiences manifesting some other things!). So what’s actually going on?

This is one of the most common frustrations of manifestors.

When you really (really) want something, you also accidentally make it really hard to call in.

That’s because you end up putting way too much importance on it, which is just another sneaky way of giving your own power away.

So if this scenario sounds familiar, don’t panic and keep reading! I’ve got some brilliant advice for you today.

It’s always key to remember that money is really just energy in another form! It’s neither good nor evil. It just is. But all the stories and drama we create around money and finances mean we’ve made it much bigger and scarier than it needs to be.

If there’s one takeaway you get from reading this make it this: freaking out about money is not going to help you attract it! The more you try to hoard it or obsess about getting it, the more it will continue to elude you.

With manifesting, it’s never about forcing the world to change to your will. It’s about becoming magnetic to your desires to the point that you attract in the very thing you want.

Those two energies are very different so be honest with yourself about what your thoughts, feelings and actions are actually saying! The message we think we’re sending is quite often very different from the reality.

However, the good news is that is that because money is energy, you are in complete control of your own relationship with money!

That means you don’t have to beat your head into the ground “trying” to figure out how to make more of it or how to keep it or how to stack it. As Yoda says, there is no try! Your relationship with money is of your own making. So the real question is: what are you going to do differently from now on in order to attract it to you?

If today’s finally the day for you to take your financial future into your own hands, then be sure to keep reading:

You’re Giving Money Too Much Power

Putting money on a pedestal is hands-down one of the biggest reasons money continues to elude you! But you’re truly the one writing your own money rules. The moment you decided money was too scary and important for you to handle was the exact moment you gave your money power away! But that also means you can start to rewrite that relationship any time you like.

So get this part straight: money isn’t better than you (like even remotely!). It’s energy just like you are. But the more you pretend like you’re not worthy of it or that you don’t understand it or that you can’t handle it, the more money will agree with you. So today’s a good time to stop! No matter what your money history has been remember that your future doesn’t have to look like that! It’s time to become money’s friend instead of pretending you’re not on its energetic level. (You totally are. Duh.)

Just like love, money isn’t something you can chase down and force to happen. So it’s time to give up that approach entirely! Instead of running at it, it’s time to attract it! You always run the risk of chasing something off when you run directly at it. So what can you do to encourage money to come to you instead of the other way around?

So what can you do to become attractive to money? Hint: this just means loving your money, paying attention to your money, nurturing your money. If your money story largely revolves around fear, then I guarantee that love, attention and nurture aren’t words you use around money at all!

You’re Controlling The How

Having a rigid of idea of how money can show up for you is another likely culprit repelling money away from you. Our own expectations can sometimes be our biggest limitations! But why put extra limits on money when there’s no reason for it? Staying away from the how is an important part of maximizing your money energy potential.

So ask yourself: do you only think money can come through certain channels (like only through your paycheck)? In reality, there are many options that money can come through: unexpected windfalls, side hustles, forgotten checks, gifts, new careers etc. But if all your money energy is focused on suddenly (randomly!) getting a raise, then it might be time to expand your money horizons! Get creative (because the Universe definitely is!).

One of the biggest pitfalls I see with manifestors is falling into the avoidance trap! In other words, if you’re actively ignoring your own money issues you’re probably also going to have problems manifesting! After all, it’s hard to get on the same vibration as something that you’re actively fearing.

Ignoring and avoiding your money issues are tempting. But trust me–no matter how bad or big you think your money problems are, you have the ability to conquer them! Right now you’re just letting your fears get the best of you.

But the truth is your fears are never nearly as big and terrible as your brain makes them out to be. The sooner you start taking action and facing your money fears head on, the sooner you’ll be moving past them for good!

You’re Not Being Grateful

Not being grateful for the money you do have is another repellent energy that might be keeping money well away from you. It can be challenging to summon gratitude when your bank balance is $5.62. But gratitude is the energy of flow and abundance (whereas fear belongs to scarcity and lack).

So I challenge you to flip your attitude on its head right now: no matter what your bank account says or how much you owe, say a big thank you for money. Put that number or idea in your hear and be truly grateful for it! Remember, this number is fleeting. Being grateful now will not tie you to this bank account balance forever! Indeed, it will actually change your vibrational energy and make you more receptive to receiving more. So try it right now and watch the money miracles happen!

Don’t ever be fooled into thinking you can’t control your own relationship with money! As with everything else, you’re always the one writing the rules. If you’re serious about creating a change, then it’s time to start the journey to change: from the inside out.

PS Looking for more? You might also want to check out this post about 5 reasons why the Law of Attraction isn’t working for you or this one about 40 small ways to massively transform your life.

Love This Post? Then Pin It To Your Abundance Board For Later!