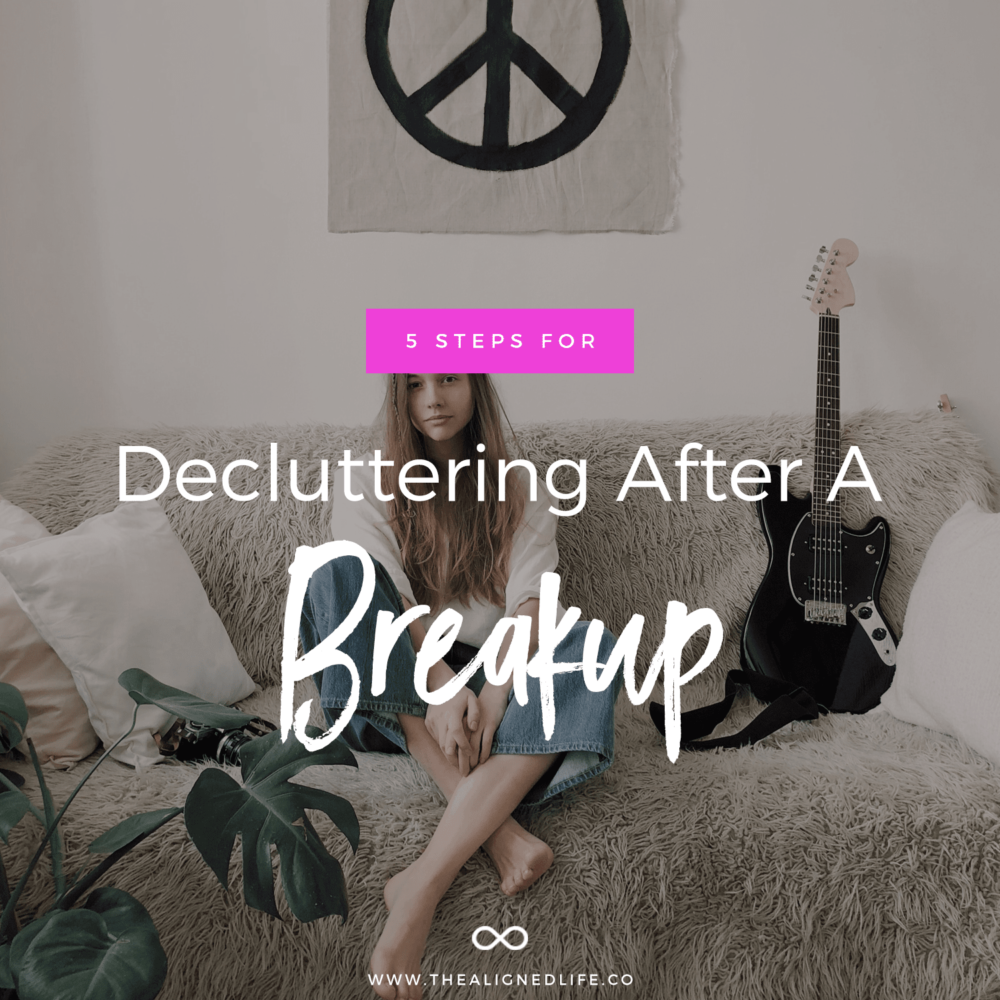 After every breakup, the time inevitably comes when you find yourself wondering:

What do I do with all the stuff?

Whether you lived together or not, spent years together or only weeks, you’ve probably got some keepsakes or gifts leftover from your relationship.

All of those physical objects are energetic ties to something that is no longer in your life.

No matter how good or bad the breakup was, the bottom line is that it’s much more difficult to move on from the past when you’re still surrounded by it!

Of course, this is often easier said than done! Decluttering after a breakup is a naturally loaded topic. You have put a lot of energy and time into something that you’re now saying goodbye to. Being faced with the physical leftovers can feel like an extra punch to the gut.

But while you might not feel up to the job, the sooner you make a game plan and tackle the project, the better.

Try thinking of all that old energy like sitting in dirty bath water. Your home is full of energy that you are surrounded by, day in and day out. After a breakup, some of that energy is no longer serving you so it’s smart to take steps to cut those energetic ties and start over fresh.

I’ve received this question twice in the last few weeks so I was inspired to share some thoughts.

Think of it this way: getting rid of things creates the space to allow new energy into your life.

Decluttering is an important part of my manifesting practice. If you want to create space to receive, you’ve got to start making room in your space or calendar.

Just remember the Universe will always rush in to fill a void! Getting rid of things physically often makes it easier for you to get over things mentally too.

5 Steps For Decluttering After A Breakup

Decluttering After A Breakup Step #1:

Physical objects hold energy. So when you hold onto mementos from the past, you’re literally linking yourself to another time/place/person. It’s important to consider whether you want to keep that energy around or not!

The “right” answer for this will always vary from person to person and situation to situation. If you can look back only fondly (and look to the future without expectation), then maybe you’re okay with keeping a few mementos around. But if you’re not yet in that state of mind, it’s better to just give it up. Now is the time to bravely move forward with your life.

Decluttering After A Breakup Step #2:

If you can’t bring yourself to part with something, at the very least hide it away from yourself. You might not think that seeing something is a trigger but your subconscious mind IS actively processing everything around you.

While it’s not quite as good as getting rid of something entirely, moving the objects out of your line of site means that at least you won’t be confronted with those memories and emotions every day. There won’t be a physical cue that tells your brain to go there.

But just remember that there’s a downside to simply hiding things: someday you WILL open that box and be suddenly confronted with all those memories from the past en masse. That’s why usually it’s better to cut the cord and just do the thing now rather than put it off for someday!

Decluttering After A Breakup Step #3:

But I know there’s often limitations about what you can and cannot get rid of. For example, when you’ve lived together, there’s often a WHOLE LOT of stuff that you’ve acquired together.

When I split from my ex, I had an apartment full of stuff that we’d bought together. As much as I’d have LOVED to gotten rid of everything and started fresh, I had to choose my battles. Replacing an entire household is an expensive business! So the bed went but the couch stayed. I got new artwork. I worked hard to give everything a fresh new feel…and it worked.

So get creative and think about other ways you can freshen up your space: a new layer of paint or rearranging the furniture can go an awfully long way towards reclaiming your space. If you can’t get rid of the bed (where a ton of emotional energy is stored!), at least invest in some new bedding. Do what you can and don’t fret about not doing it the “right way”.

(This step can extend beyond just gifts and mutually acquired belongings. For example, I purged my entire underwear drawer and replaced things with some saucy new bits! I highly recommend giving that one a go. ???? )

Decluttering After A Breakup Step #4:

After you’ve purged or hidden everything, it’s time for an energetic deep clean. Space clearing (or smudging) is a technique that’s important for getting rid of any lingering unwanted vibes. Think of it this way: your home has been holding these things and their energy for quite some time! When you’re ready for a fresh start, give yourself the best chance of success and give it all a good energy clean sweep.

For the full rundown on how to do it (including free printable), click here.

Decluttering After A Breakup Step #5:

In our modern culture, there is no public ritual for loss after a breakup. But saying goodbye to this chapter in your life is an important occasion for you to mark. So if the idea resonates with you, create a ceremony to say goodbye to the stuff. Getting rid of stuff is NOT about being hostile towards the person you were once with. You can say goodbye solely because it’s good for YOU.

If donating a pile of stuff seems too harsh, take a page out of Marie Kondo’s book and say thank you to each item before you get rid of it. You can get as fancy as you like with this but all you really need to do is put your hand on the object and take a moment of gratitude for having it in your life.
This gives a nice sense of closure: the objects have served a purpose and now it’s time to move on.

(And if you don’t see any point in this step, that’s cool too!)

Breakups are never easy and going through the physical reminders is no easy task. So go easy on yourself! You don’t have to throw out everything in one day if you’re not ready. Take a break or split the work up over the next month. Just be sure to commit to the process because the longer you hide from it, the worse it will seem.

I hope this post helps you through what is always a strange and difficult time. If you loved this post, please remember to share it. Much ???? to you all.

PS Looking for more? You might also want to check out this post about your shadow self and the Law of Attraction or this one about 3 ways to support your divine purpose. 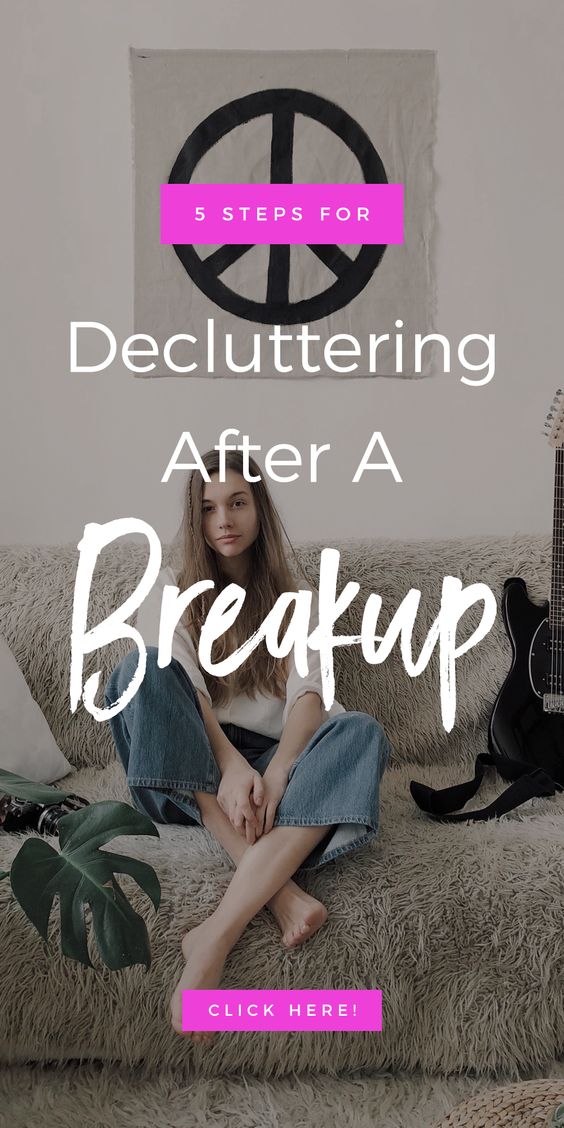