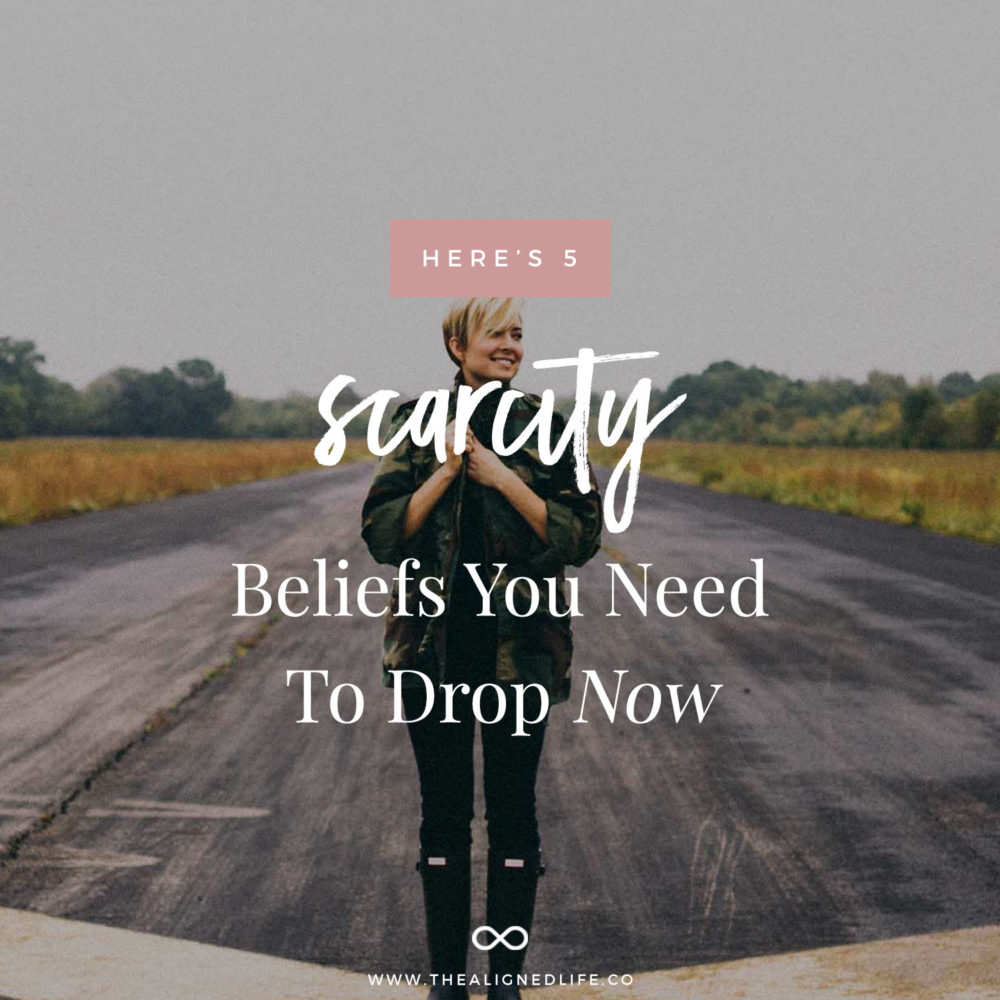 Have you noticed that when you focus more on one thing it’s reverse aspect also comes into focus? That’s what it’s been like lately for me with abundance and scarcity. In fact, it’s only recently that I’ve realized just how prevalent scarcity thinking really is!

Fact: scarcity beliefs are the default setting for most of us–and that’s not good news!

When you’re constantly just trying to keep your head above water, you’re expelling a lot of energy on that one task. Plus when you’re that focused, you tend to get tunnel vision about the problem you’re solving, forgetting about the big picture entirely!

Let’s start by defining what scarcity is: it’s the perceived shortfall between what you have and what you need.

Scarcity-based thoughts are the ultimate in human suffering.

They’re also such a big mental trap that it takes more than just a mental note to “think positive” to overcome them!

You need to truly notice where you’re at and disregard the fear that you’re “supposed to” feel in order to create abundant flow instead.

No matter what you choose–abundance or scarcity–your brain will ultimately believe in what you tell it! That means if you choose to uphold this rigid way of looking at the world, you have no choice but to occupy a world that reflects exactly that.

But you can also choose the total opposite–if you want to!

Choosing to believe in things you actually want to be true is key to creating happiness.

And happiness is what we’re all after in the end!

Choosing abundance is more than a leap of faith. It’s a state of being–and one you might struggle with if you’re not even aware what the real problem is!

So today I wanted to expand on this idea so you can start to see just how often you might be falling into the scarcity thinking trap.

“I can’t afford that. I don’t have enough money. There’s never enough to go around. Money doesn’t grow on trees.”

Raise your hand if money scarcity is your default way of thinking! But don’t worry–this is me too! We’re all raised with the belief structures of the world around us. This type of scarcity thinking is usually passed on from one generation to the next. All those sayings about money are things you heard as a child–before you even had your own bank account to worry about.

A real-life example of money scarcity thinking is using a payday loan company. Those companies are notorious for their exorbitant pricing. Yet every single person who walks into one really does believe that they’ll only need the money “this one time”. Things are bound to shift in the future, right?

The only problem is that they rarely do. Instead of getting ahead by the next paycheck this financially-deadly cycle just keeps perpetrating itself–and gets worse and worse over time. It’s so easy for people who aren’t in this situation to see the fallacy in thinking here. But when you are faced with the real-life consequences of not being able to pay for something, then you tend to solve the immediate problem with no regard for the bigger picture.

Choosing abundance involves not falling prey to slick advertising and the fear of your ego mind. Maybe you’ll live on ramen for a month or default on a payment or take out a bank loan. Facing a money problem certainly isn’t unusual–and that also means it’s solvable! So try not to panic and make rash decisions. There is always a way out!

“There aren’t any good ones left. All men/women are evil. I’m too old/unattractive/etc.”

Almost every day I get messages from people with a scarcity mentality about love!The most common way this manifests by settling for relationships that aren’t really good for us. This only makes sense: if you really think “there aren’t any good ones left” you’re going to be much more willing to jump into a relationship that isn’t aligned to you than if you believe there are lots of wonderful people to date left in the world.

Want to see this belief in action? Just switch on The Bachelor! While in the real world, few people feel pressed to act crazy to earn the “love” of a potential suitor. But put people in a fierce competition and what do you get? Drama. Lots of it!

While drama is good for ratings, it’s not so good for us in the real world! Plus of course, the ultimate irony is that if you’re in a relationship with a lesser qualified candidate, you’re going to miss the opportunity to meet your Mr/Ms Right! Again, scarcity thinking will sacrifice your future happiness to fulfill your need to be partnered up right now.

Choosing to believe in abundance and holding space for someone who’s actually right for you might be tough now but it will actually pay off with what you want in the end.

“I just can’t eat bread/chocolate/etc. I’ll get so fat if I eat that. I don’t want to break my diet.”

Fact: I don’t believe in diets and it’s for this very reason! Just as soon as I decide that I can’t have something, it’s basically all I can think about. Call it The Pink Elephant Syndrome for your stomach: as soon as I ask you to not think of a pink elephant, your brain automatically goes there right?

When it comes to diets, scarcity thinking is frequently the culprit behind following a diet perfectly for three weeks then binging on Ben and Jerry’s. Your attention is so focused on what you can’t have that you can’t help but over-glamorize everything about the food that’s forbidden. No one really needs to eat two tubs of ice cream and yet someone who’s deprived themselves for a long time will do exactly that. The brain has created this excessive desire out of its lack state and simply eating one chocolate chip cookie (or indulging in some other “normal” way) just isn’t going to do it.

I’m not a dietician obviously! But my personal belief around diets is that they seldom work for this reason. But the thing that does work may take longer and sound like a lot more work: gradually improving your eating and exercise habits over time.

“I’m always late. There’s not enough hours in the day. I don’t have time.”

Are you over-booked or constantly running (late) from appointment to appointment? Maybe you’re that (annoying!) friend who’s chronically twenty minutes late. Or maybe you just constantly underestimate your transportation time. All of these things are surefire signs of time scarcity.

An easy example would be someone who’s running late to an appointment. Instead of staying calm while driving there, they end up speeding–and inevitably get caught! In the end, getting ticketed (and having to pay for the ticket) takes up even more energy and time than just keeping calm and obeying the speed limits. It’s sacrificing your future for an attempt at an immediate payoff.

Nonetheless, we’ve all been there right? This example just goes to show how scarcity thinking can really control your actions without you even noticing!

The answer to time scarcity thinking is simply switch your way of thinking about it! My favorite way is to learn how to control time (which isn’t as crazy as it sounds!) No matter what you’ve been taught to believe, we can actually control time just like we can control the other elements in our life! So if you want a primer on how to switch from Newtonian-time to Einstein-time, click here!

“I might need that later. I’m going to fit into that again.

If you needed Marie Kondo, then you’re probably also a victim of physical object scarcity thinking! It’s simple human nature to become incredibly attached to the physical objects in our life. However, sometimes that attachment comes from a place of scarcity. When we think we have to hold onto things because we won’t be able to buy them again, we’re falling into a scarcity trap.

One common example is someone who keeps around their old skinny jeans as “motivation” to get fit and lose some weight. However, every time they see the jeans in their closet, they’re hit more by guilt and self-loathing rather than motivation. Plus the truth of the matter is that clothing styles change awfully quickly! Even if we did lose the weight, we probably wouldn’t be putting on our jeans from five years ago ever again.

Ultimately, holding onto things that don’t serve you usually means you don’t believe you’ll be able to buy them again! But how often is that true in our consumer-based society? Even if you get rid of something and have a sudden need for it three years later, almost everything you could possibly want can be delivered right to your door. When you remember your power as a consumer (and as a person who can figure out how to get more money!), then you can stop being so attached to the things you’ve already purchased!

The quickest way to move from lack to abundance is always gratitude. Believing in the lies of scarcity is simply a result of focusing our attention on the wrong thing! This of course goes exactly against what your ego wants. But fear is always going to keep you feeling stuck and small. If you’re ready for something new, it’s time to choose abundance in every area of your life!

No matter what’s going on for you right now, it’s key to remember that you are ultimately in charge of your thoughts! The switch to an abundance mentality can be yours as long as you’re willing to put in the work.

Good luck with this & let me know how it goes!

PS Looking for more? You might also want to check out this post about your top 10 fears and how to get over them or this one about navigating the Cosmic 2×4 Moment.